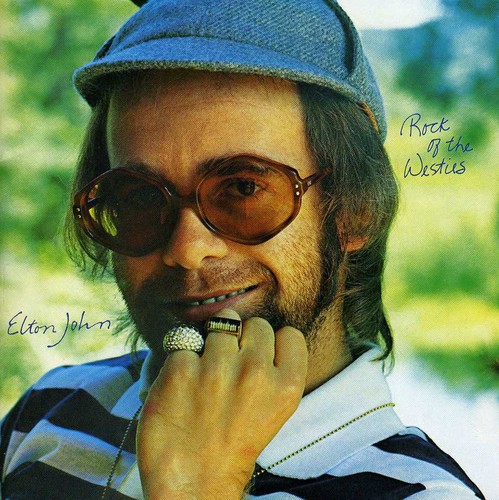 This newly remastered reissue of one of Elton's classic LPs (featuring complete packaging and detailed sleeve notes) includes 2 bonus tracks: "Sugar on the Floor" and "Planes."

''Rock of the Westies'' is the tenth studio album by British singer/songwriter Elton John, released in 1975 (see 1975 in music).

Like ''Captain Fantastic and the Brown Dirt Cowboy'', ''Rock of the Westies'' also debuted on the United States Billboard charts at #1, the only two albums at that time to have done so. It was less successful in the artist's home territory of the United Kingdom, where it only reached #5. ''Rock of the Westies'' also contained the U.S. #1 (but only #14 in the UK) single, "Island Girl," which was released prior to the album coming out. Elton John noted at the time in a radio interview that he had wanted to release "Dan Dare (Pilot of the Future)" as the album's first single instead of "Island Girl," because he thought it had more commercial potential. He was however, overruled, and "Dan Dare" was never released as a single, and "Island Girl" became a huge hit.

The make-up of Elton John's band was different on ''Rock of the Westies'', with long-time drummer Nigel Olsson and long-time bass player Dee Murray gone after being fired via telephone by Elton himself. Accordingly, the sound of John's music was somewhat different on this album, and had a much harder edge to it. This was a disappointment to many long-time Elton John fans, which was evident by the disappointing sales of his next single from ''Rock of the Westies'' (the double-sided "Grow Some Funk of Your Own" / "I Feel Like a Bullet (In the Gun of Robert Ford)"), as well as the disappointing sales of his next effort, the double album ''Blue Moves''.

The track "Hard Luck Story" had already been recorded by Kiki Dee and released as a single one year prior to its recording for "Rock Of The Westies" . It and "Don't Go Breaking My Heart" are credited to Ann Orson/Carte Blanche (An horse and cart, Blanche) a moniker Elton devised when composing a song (music and lyrics) on his own. The name Ann Orson is also used as the name of a back-up vocalist which is assumed to be Elton.

Labelle performs backing vocals on the opening track, "Medley: Yell Help/Wednesday Night/Ugly." However, when some of their vocals were accidentally wiped from the tape on the closing section of the track, Gus Dudgeon smoked some marijuana and imitated them, an (uncredited) performance that made it onto the final record.

While the music of ''Rock of the Westies'' was not well-regarded during and immediately after the time of its release, it has subsequently been revisited over time by music critics and Elton John fans alike as being a strong effort, and probably his last "great" album during that stage of his career.

Outside the US and Canada, this was the last original studio release from John on DJM Records, as he would finally be able to record for his own Rocket Records.