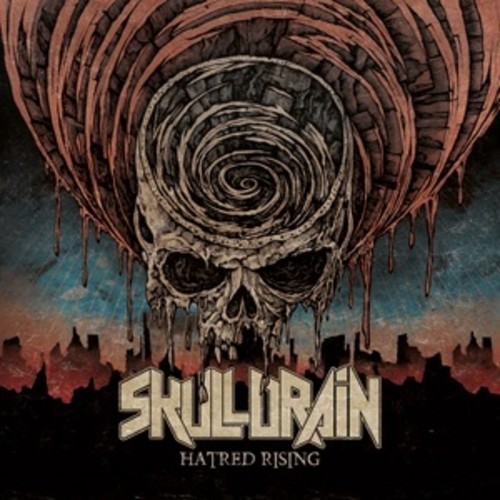 2017 release. After pulling the plug on dead-end project Zodiac Ciphers, Skulldrain was formed in December 2014 in Gefle, Sweden. Some of the previous members were asked to join guitarist Sami Mäki (ex-Undivine, ex-Altered Aeon) to his musical concept. He had the band name and some songs ready to go. First to join the ranks was Emil Berglin (FKÜ, Sorcery, Sordid flesh) on drums and Eki Kumpulainen (Demonical, ex-Undivine) on guitar. Then Kristofer Elemyr (Ereb Altor, ex-Undivine, ex-Sectu) joined for vocal and bass duties. Fast and hard, guitar oriented thrash metal was the vision from the start, and it is what Skulldrain has come to represent. With influences like Slayer, Lamb of God, Testament, Destruction, Death, Vader and The Haunted, expect a massive tsunami of loud guitars! The lyrics focus a lot on social injustices and inequalities. In 2015 songs were composed and arranged, lyrics were written, pre-production demos were recorded and things started to move along smoothly. Some club gigs and festival shows were done through the year. At Getaway Rock Festival, Skulldrain was discovered by Thomas Hörnkvist of ViciSolum Productions and he snatched Skulldrain for the debut album.