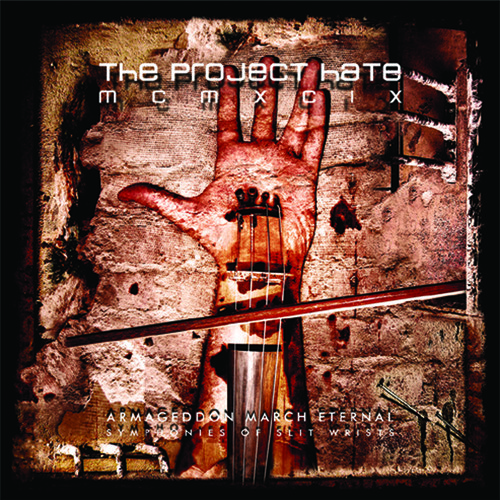 (Please call first)
DISC: 1
1. At the Entrance to Hell's Unholy Fire
2. The Bleeding Eyes of a Breeding Whore
3. I See Nothing But Flesh
4. Resurrected for Massive Torture
5. We Couldn't Be Further from the Truce
6. Godslaughtering Murder Machine
7. Symphony of the Deceived
8. Loveless, Godless, Flawless

Unique is a word often attributed to music but none so truly realized as when attached to Sweden-based The Project Hate MCMXCIX. On their fourth studio album, this dual-vocalist (one male/one female) electronic-come-blackened death metal band have written an album of incredible quality and compositions that will surely stand out amongst the year's new releases. Recorded at Unisound, "Armageddon March Eternal - Symphonies of slit wrists" was produced by Dan Swanö & Lord K. Philipson. Formed in 1999, The Project Hate MCMXCIX is Lord K. Philipson's musical vision of perfection. And to enhance said vision a lot of different people are brought in with each and every album, all adding their own unique touch to the album(s) they are on.