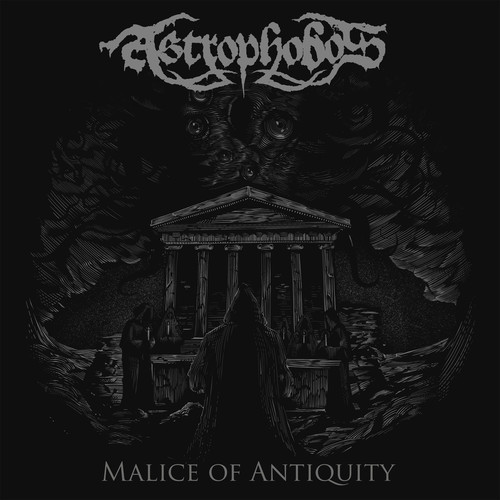 (Please call first)
DISC: 1
1. Fire of Catharsis
2. Begotten in Black
3. Descending Shadows
4. Abattoir for Flesh and Faith
5. The Summoning Call
6. The Wolves Between the Stars
7. Until the Red of Dawn
8. The Nourishing Hate
9. Imperator Noctis

"Malice of Antiquity", the long awaited second album by Swedish black metal band Astrophobos, is set to be released on January 18th 2019 by Triumvirate Records. With the release of their debut EP "Arcane Secrets" in 2010, Astrophobos quickly made a name for themselves with their ferocious yet melodic style of black metal. Following up on their early success with the critically acclaimed full-length album "Remnants of Forgotten Horrors" (2014) and the pummeling EP "Enthroned in Flesh" (2016), Astrophobos are now back with their most varied and dynamic output to date. Mixed and mastered by Marco Mastrobueno (FLESHGOD APOCALYPSE, HOUR OF PENANCE) at Kick Recording Studios, "Malice of Antiquity" offers nine songs of melodic Swedish black metal. While retaining their trademark Astrophobos sound, the new album shows the band exploring new territories. From the thrashing opening track "Fire of Catharsis" to the epic finale "Imperator Noctis" - that features guest vocals by Elisabetta Marchetti (INNO, ex-RITI OCCULTI) - Astrophobos showcase their skills when it comes to writing varied and memorable songs. As 2019 marks the 10th anniversary of the bands inception, the bands core remains the same with Micke Broman on vocals and bass and Martin Andersson and Jonas Ehlin on guitars. Session drums on the new album were skillfully handled by Giuseppe Orlando (THE FORESHADOWING, ex-NOVEMBRE). The stunning cover art was created by American artist Scott Buoncristiano (MASTODON, SWANS, MELVINS).