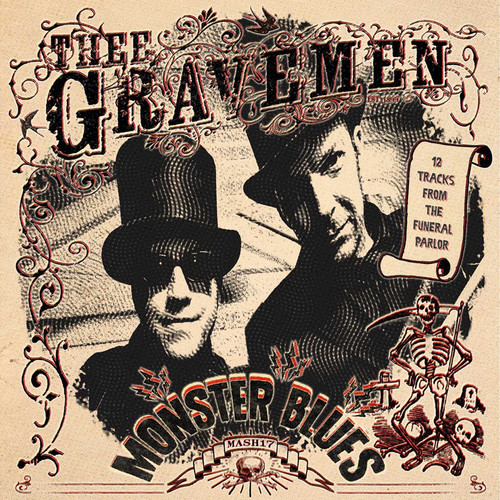 2015 release from the trash-blues-rock'n'roll duo from the southern Swedish town of Malmö. Lee 'Leadfoot' Tea plays guitar and sings and Devilish Daz plays drums and screams. Thee Gravemen live in a world of horror movies, werewolves, vampires, monsters, hot-rods, motorcycles and 1950s trash! It's a mixed up, mashed up sound of all the things these two crazy English guys love! Both Lee Tea and Daz originate from the South and South West of England, both having formed and played in bands in the UK, Lee Tea formed and played in UK garage band Thee Exciters. And after moving to Sweden formed the wild R'n'B punk combo The Branded. Daz had been playing with many old school London psychobilly bands, most notably was Skitzo from the late '80s onwards. After meeting up in a dark sleazy Malmö bar one night they decided to form a low down sleazy trash 'n' roll band... and so Thee Gravemen was born.