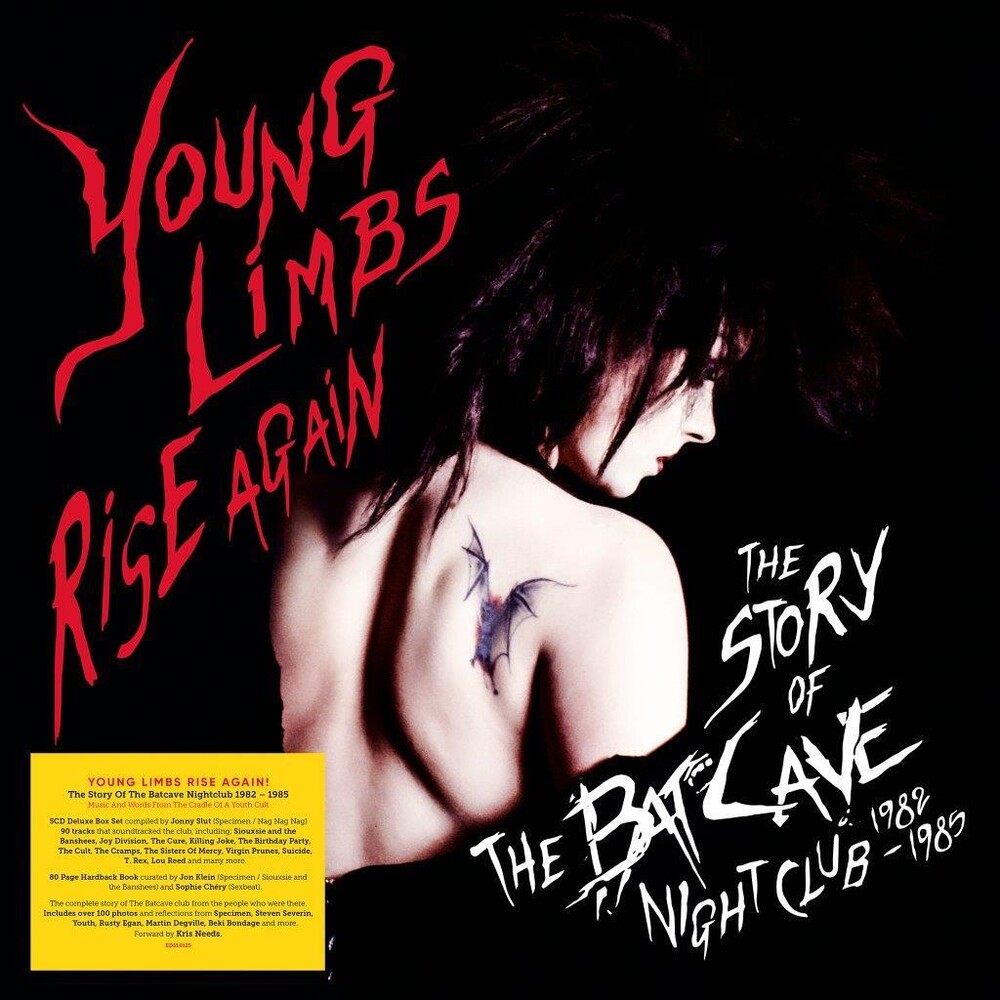 London 1982. As the new romantic youthquake of 1981/1982 faded, and after what felt like a lifetime since punk's last gasp, a tiny nightclub opened it's doors in London's Soho. Drawing to it a new generation of misfits and miscreants with a penchant for polysexual hedonism, for dressing up and showing out, The Batcave became the dark heart of alternative club culture, just like The Roxy and The Blitz before it. Art school students, ex-punks and psychobillys, boys and girls, gays, straights, don't-knows and don't-cares, Camden and Kensington Market stallholders, professional squatters, kids on the dole, kids in bands, nocturnal music journalists, edgy fashionistas, androgynous randoms and even a smattering of bona fide popstars - from Nick Cave to Siouxsie Sioux, Marc Almond, Robert Smith, Killing Joke and Sigue Sigue Sputnik. All were welcome to pile in, gawp at the hair, ripped, torn, bleached and rubberised fashions, and death-mask make-up and take in the dancefloor's heady musical mix of beats-heavy post-punk pioneers, outsider icons like Wayne County and The Cramps, and a teetering pile of lusty glam rock singles from the likes of T. Rex and The Sweet. The club even had it's own house band, Specimen, fronted by charismatic and ghoulishly handsome frontman Olli Wisdom (RIP) as well as playing host to a slew of first-wave bands of what came to be known as "goth". And it is with Specimen's Jon Klein (later, a Banshee, too) and keyboardist Jonny Slut (later founder of legendary club night Nag Nag Nag) along with Sophie Chery from another stalwart Batcave band, Sexbeat, who've worked with Demon in putting together this deluxe and definitive musical and visual accompaniment to a moment that sparked a global youth cult. This 90-track 5CD Collection is the first of it's kind. It captures both the fun and freedom of The Batcave and a revolutionary moment in time. It's also the first to reflect the musical influences on the scene and how that scene pointed forwards. Above everything else, it's a fascinating evocation of what you'd have actually heard had you stumbled into that sweaty, energetic dive between '82 and '84. With it's very strong tracklisting, Young Limbs Rise Again includes music from just about everybody that mattered - from The Cure to Joy Division, from The Sisters Of Mercy to Sparks. Accompanying the 5CDs is a stunning 80-page hardback book, with an introduction from Kris Needs, packed with flyers, record sleeves, over 100 photographs, many previously unseen, and the full story of the club as told by the people who were there. The Batcave's liberating air of anything-goes creativity spawned, encouraged and hosted a new generation of bands while it's fashion aesthetic - fishnets, rubber, leather, diamante, piercings, jewellery, and absolutely *anything* in black - seeped first into the wider alternative scene and then the mainstream in Britain before spreading it's tentacles literally all around the world. From Sydney to Mexico City to Paris to Brazil to Berlin - what came to be known as goth here in early-80s London, is arguably one of the UK's greatest cultural exports. The goth aesthetic forged in those tiny west end dives has gone on to inform generation after generation of bands from Nine Inch Nails to Yungblud as well as walking fashion runways for Burberry, McQueen and Galiano and giving Hollywood a whole new dark palette to work with - from Tim Burton's weird cinematic adventures to TV shows as diverse as Buffy The Vampire Slayer and American Horror Story. That thing the kids still like? It all started HERE. As Specimen's Jonny Slut says - "It was a light bulb for all the freaks and people like myself who were from the sticks and wanted a bit more from life. Freaks, weirdos, sexual deviants... There's people around who'll always be attracted by something shiny, glittering, exciting... It was more Gotham City than Aleister Crowley."