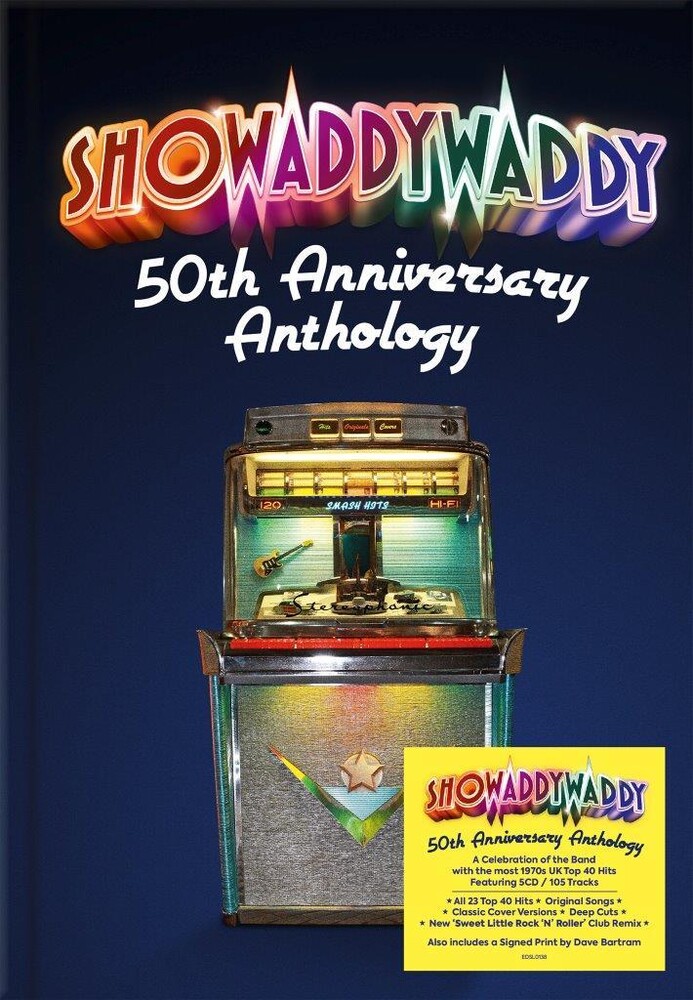 Celebrating 50 years of Showaddywaddy with this 5CD/106 Track "50th Anniversary Anthology"  From their winning appearance on an edition of 'New Faces', the 'Britain's Got Talent' of the day, to become runners up in the series' 'All Winners Final', it took just a matter of months until Showaddywaddy released their debut hit, 'Hey Rock And Roll' and the rest is Pop Music history, with the band having more Top 40 UK hits than any other Artist or Band in the 1970s.  Packaged in an A5 Mediabook and prefaced with a 1,700-word retrospective recall by the Band's co-founder and manager Dave Bartram, each of the five discs is themed, with it's own liner notes from Showaddywaddy expert Steve Thorpe, giving a glorious insight as to why the band are still revered and selling out concerts today.  The set includes a previously unreleased 'Hit Mix', as well as a brand new remix of 'Sweet Little Rock 'N' Roller' by Buenos Aires based Producer, Remixer and DJ Ladies On Mars. When asked about hearing the track for the first time, LOM said that it had an Italo-Disco feel. He was so right, having been co-written by Pete Yellowstone (aka Peter Papini) and Roberto Danova, along with Gavin Dare.  Showaddywaddy are consistently acknowledged as the hardest working band in the country, currently with 75 shows scheduled between November 2022 and December 2023!  This set has been produced in collaboration with Dave Bartram, in association with Romeo Challenger, the sole surviving member of the original Band line up.  Limited Edition contains a print signed by Dave Bartram.