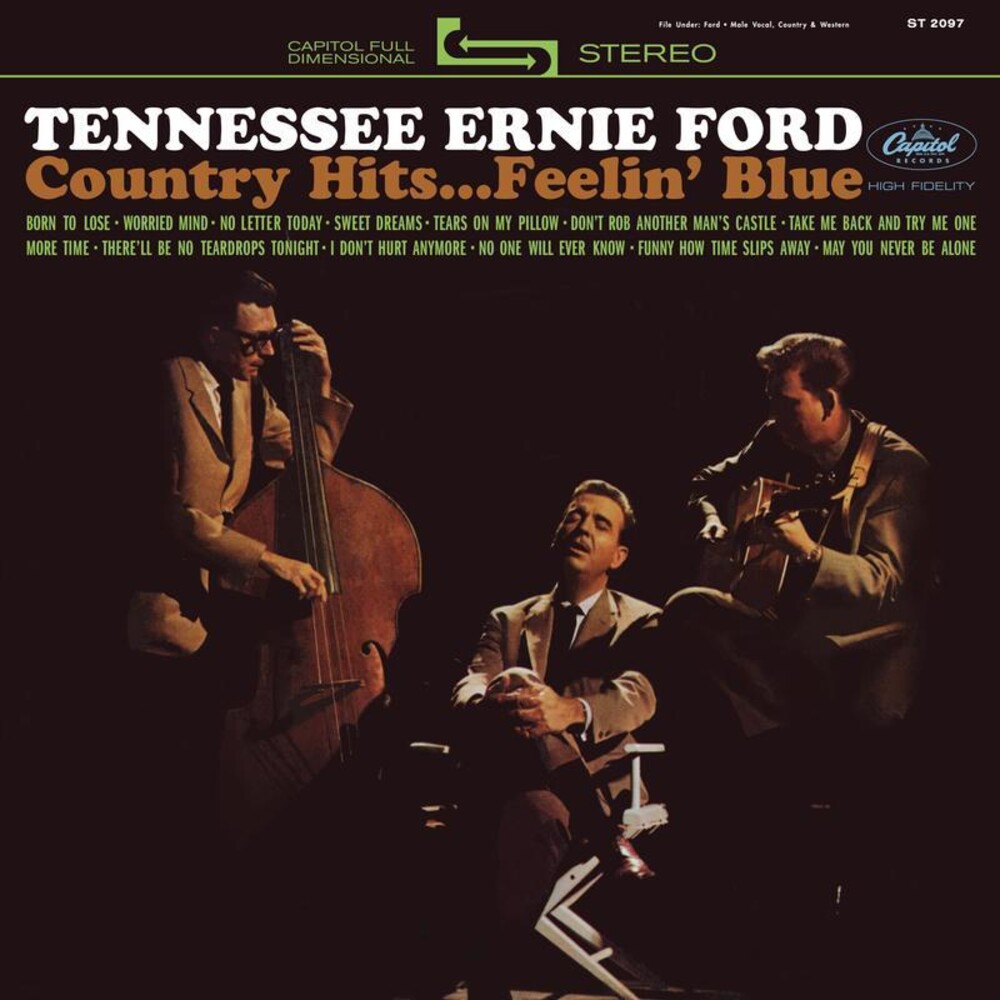 Country Hits... Feelin' Blue, released by Tennessee Ernie Ford in 1964, is a throwback - or as the liner notes to this country classic (perhaps Ford's best) say, 'You don't hear much singing like this nowadays - just a voice with easy guitar and bass accompaniment.' But oh, what a voice. Ford's resonant-voiced baritone might be best known for his 1955 cover of Merle Travis' grim coal-mining song 'Sixteen Tons,' with sales topping 4 million copies. The hit cemented Ford's place as one of America's top entertainers - a singer and TV host who enjoyed success during the 1950s, '60s and '70s in multiple musical genres - country, pop, and gospel. He first guested on the Grand Ole Opry in 1950, and in 1953 he became the first country singer to appear at London's prestigious Palladium. Soon NBC hired him to emcee the television game show Kollege of Musical Knowledge, and also to host his own weekday program. His subsequent prime-time network variety programs made 'Bless your little pea-pickin' hearts' a household catch phrase and provided wide exposure for his musical renditions of great country and gospel favorites. The songs chosen by Ford for Country Hits... Feelin' Blue are all favorites, some of the best tunes from the inspired pens of such country composers as Hank Williams, Fred Rose, Jenny Lou Carson, Willie Nelson, and Don Gibson. The album (one of Ford's favorites) was recorded with backup provided by just two musicians; guitarist Billy Strange and bassist John Mosher. Some of these songs go back to the start of Ford's career when he and Strange were working together as cast members of Los Angeles's Hometown Jamboree country music radio show. Mosher was a member of Ford's TV show band since it's inception. Strange created the musical arrangements for Country Hits... Feelin' Blue - a quiet, simple get-together with the songs they had been playing and singing down through the years. That's why it's more than just another album. You can hear the affection and understanding coming through. For this Analogue Productions Hybrid SACD reissue we turned to an expert who once again brought stellar craftsmanship to the creation of a phenomenal-sounding release. Kevin Gray at Cohearent Audio remastered the album to DSD from the original analog tape. Albums have been made with lots more people and lots more sound. But quantity never did mean quality. This is just a simple, great album. Great voice, great guitar and bass, and great songs - the best of each.