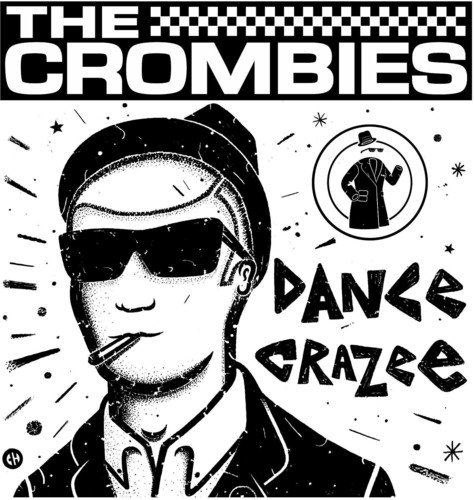 If you don't dance to THE Crombies, you don't dance! "Dance Crazee" is the debut album from Chicago's 2-TONE champs, formed in 2010 by ex-members of DEAL'S GONE BAD and LORD MIKE'S DIRTY CALYPSONIANS. The band had a very simple idea - start out as a 2-TONE cover band playing the hits of THE SPECIALS, BAD MANNERS, BEAT, MADNESS, etc - then later create 2-TONE versions of songs that have that ska potential! Lead by original Deal's Gone Bad singer "Lord" Mike Park, the band's first 2-TONE'd studio cut was NINEY THE OBSERVER's "BLOOD & FIRE" released on a limited edition 7? single, with a version of the classic DGB song "MAD AT THE WORLD" on the flip. It was an instant hit, and soon followed up with an amazing version of THE CLASH's "ENGLISH CIVIL WAR". In 2016 the band finished their debut full length album "DANCE CRAZEE", which we are so proud to re-release today on randm colored vinyl. "DANCE CRAZEE" features 11 cuts of classic British second wave 2-TONE ska - the band have re-recorded the songs from their singles and have added killer versions of BILLY BRAGG's "LEVI STUBB'S TEARS", PRINCE BUSTERS' "WASH WASH", "DANCE CLEOPATRA", the MUNSTERS theme, and two songs recorded with RODDY RADIATION of THE SPECIALS, including his original "HEY LITTLE RICH GIRL" and the band's first original tune "IT'S NOT YOU". To top it off, the iconic 2-TONE inspired "Crombie" character designed by Chema Skandal dominates the cover, and is a perfect addition to the collection of debuts by The Specials, Madness, and The Selecter.