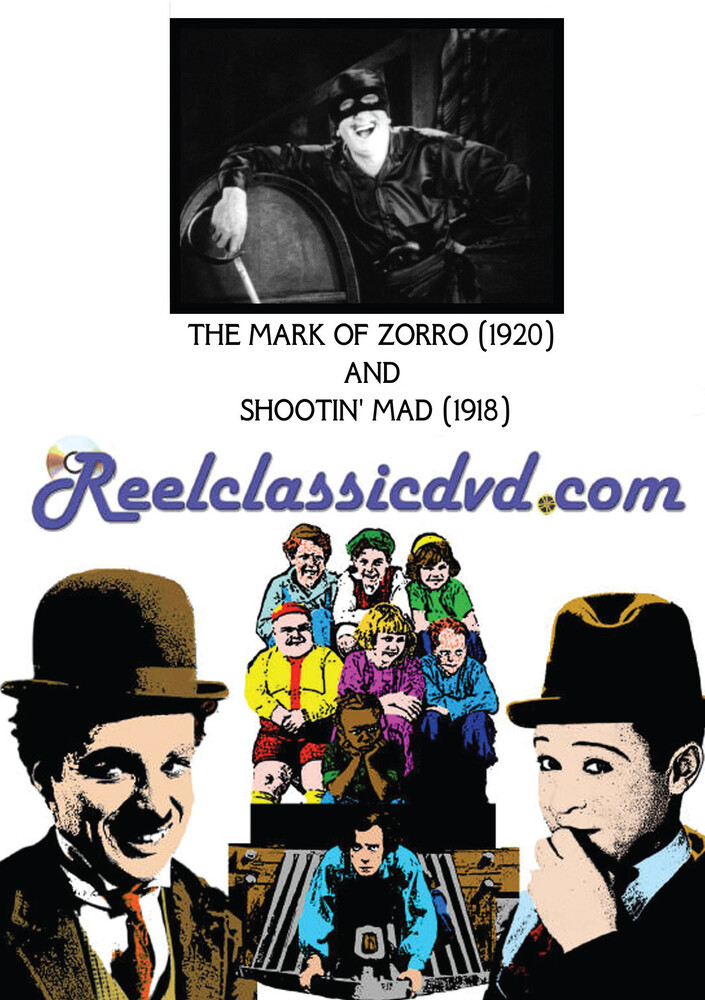 THE MARK OF ZORRO starring Douglas Fairbanks, Marguerite de la Motte, Noah Beery, Robert McKim, Charles Hill Mailes and Snitz Edwards. Directed by Fred Niblo. Zorro, hero of the poor and oppressed! Zorro, champion of the weak and downtrodden! Zorro, mysterious masked swordsman who appears from nowhere and can outduel any challenger! Douglas Fairbanks IS the original Zorro in this, one of his most famous, action-packed and entertaining films. A showcase for his charm and amazing athletic talents, Doug plays a dual role as the rich and foppish Don Diego Vega, a disappointment to his father and a miserable failure at love, who secretly becomes the courageous fighter of injustice and champion to those in need. This is the breakthrough film for Fairbanks, forever establishing his persona as the dashing, energetic hero. A role he would embrace throughout the rest of his silent film career. A dazzling performance! SHOOTIN' MAD starring G.M. "Broncho Billy" Anderson, Joy Lewis, Fred Church and E.A. Whitting. Directed by G.M. Anderson. Pretty Mary and her father are new arrivals in the lawless western town of Bear Gulch. Desiring Mary for himself, evil saloon owner, Ace High Cowan, has her father murdered and frames Billy for the crime. With Billy and her father out of the way, Cowan can carry out his wicked schemes on defenseless Mary! With lots of gun-play and action, this is a top notch Bronco Billy western. Original music scores composed and performed by John Mucci!