Michael Cleveland & Flamekeeper - On Down The Line | RECORD STORE DAY 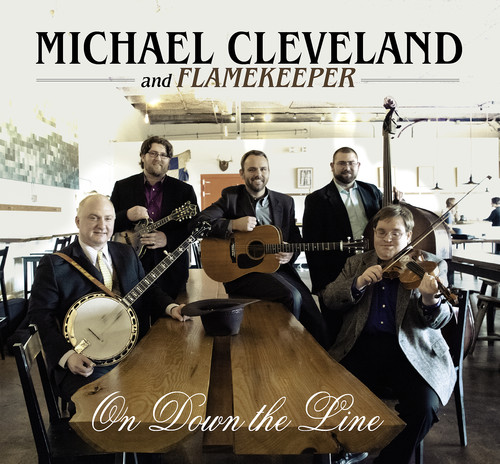 2014 album from one of the premier Bluegrass fiddlers of his generation. With nine International Bluegrass Music Association (IBMA) Fiddle Player of the Year awards under his belt, he is one of the most celebrated fiddlers in the history of the music. ON DOWN THE LINE finds Michael Cleveland and Flamekeeper hitting their stride as a band. This quintet has it all and, under the guiding hand of producer Jeff White (Vince Gill, the Chieftains), the band has never sounded better. Cleveland delivers a haunting solo fiddle version of 'Jack of Diamonds' and a show-stopping version of 'Orange Blossom Special.' Guitarist/vocalist Joshua Richards weighs in with the original 'Johnny Thompson' and his tenor voice soars over 'The Sunny Side of Town.' Rounding out the band are mandolin/vocalist Nathan Livers and bassist/vocalist Tyler Griffith. Michael Cleveland and Flamekeeper are important torchbearers for the Bluegrass tradition and ON DOWN THE LINE will further their reputation as one of the most important Bluegrass groups of our time.