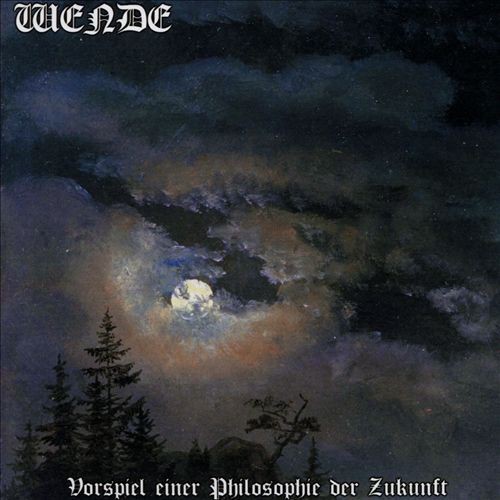 The sense of isolation and mystery that pervades Wende, the solo project from multi-instrumentalist and compose Zamiel (who is also a member of the Chicago three-piece black metal project Skinwalker), would situate it perfectly within windswept, much-mythologized Scandinavian landscape. But instead of Norway, this deeply philosophical (but no less frostbitten) project is based deep in the woods of the Okanagan, in Washington. Originally released in an extremely limited and hard-to-acquire format in 2011, the first full-length from Wende, Vorspiel einer Philosophie der Zukunft ("a prelude to the philosophy of the future") has finally been given a wider release, and deservedly so. The record is a strange construction, alternating between tracks of blisteringly acerbic, Burzum-like black metal and much more introspective, instrumental ambience. The effect is profoundly unsettling, but the sense of ebb and flow, construction and dissolution, suits the intellectual framework of the project well. The one unifying aspect of the record is how cold it is; every riff is as merciless as flesh sticking to frozen metal. But the way the cold manifests can be profoundly different, from the deep cold vacuum of space evoked by the ambient tracks to the violent icy blasts of the more aggressive parts of the record. The environment conjured by Vorspiel einer Philosophie der Zukunft is unremittingly hostile, but also unquestioningly beautiful, if you can handle the threat of frostbite. (Moribund)