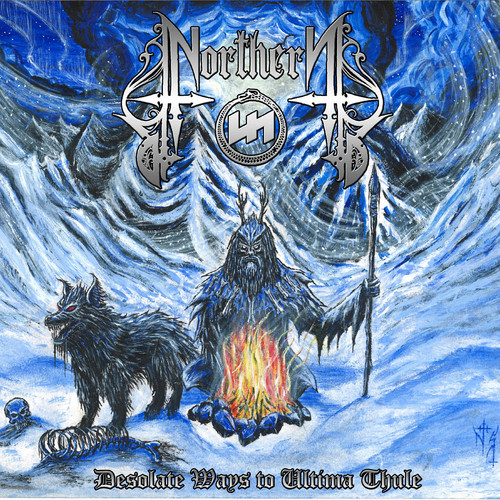 2018 release. North America's #1 Viking metal band returns with the ground-breaking Desolate Ways to Ultima Thule, their landmark masterpiece third album! Building upon their solid foundation of Viking/pagan metal roots, on Desolate Ways... Northern (formerly Cold Northern Vengeance) radically expands their sound with heavy influences from death metal, east coast hard-core, symphonic metal, traditional folk and of course black metal, culminating in a unique and strikingly original sound all their own. Northern's most diverse and catalyzing album to date. For the first time in their 15+ year careers Northern take a strong political stance standing up for Liberty, Freedom of Speech and Individuality (over conformist mentality), whether taking on the book-burning bully boys of antifa with the anthemic, soon-to-be classic "Live Free or Die", to the folk & country leanings of "Fall Into Winter", Northern firmly take a stance for the true ideals of American Freedom! Ancient, acoustic, Norse anthemic classics like "Fall Into Winter" break into raging black/death crushers like "Woden's Revenge", proving Desolate Ways to Ultima Thule to be one of the most musically diverse rock/metal albums of the last decade! A hard accomplishment for any band to achieve while maintaining a cohesive sound of their own instead of a you-tube mis-mash of disparate styles that never work. From a cult Burzum cover to Hank Williams medleys and beyond, Northern crafts a new standard for both rock and metal to beat in the years to come! "Enter an enchanted forest of dark Paganism, serial killer stomping grounds, Gnostic demonology, death fascination, hillbilly substance abuse, and other assorted devil worship. Join us in the land you know not. A distant and unknown region. These are the Desolate Ways to Ultima Thule