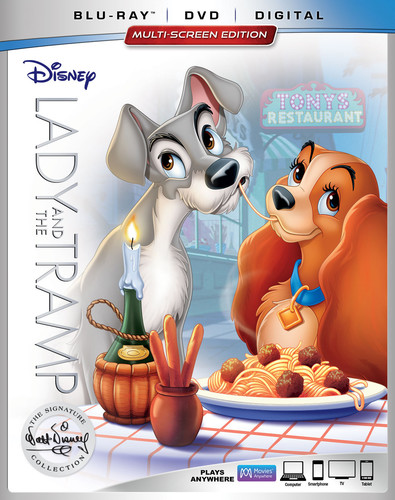 Now a celebrated part of the Walt Disney Signature Collection, LADY AND THE TRAMP captivates audiences of all ages with brilliant animation, remarkable songs and new bonus extras!|This was the first Disney animated feature filmed in CinemaScope, which necessitated extra work in planning scenes and action to fill the entire screen.|In early script versions Tramp was first called Homer, then Rags, and Bozo.|A 1940 script introduced the twin Siamese Cats. Eventually known as Si and Am, they were at first named Nip and Tuck.|In addition to starring Barbara Luddy as Lady and Larry Roberts as Tramp, the film features Peggy Lee as the voice of Darling, the Siamese cats, and Peg, the show dog. Peggy Lee also helped promote the film on the Disney television series, explaining her work with the score and singing a few numbers from the film.