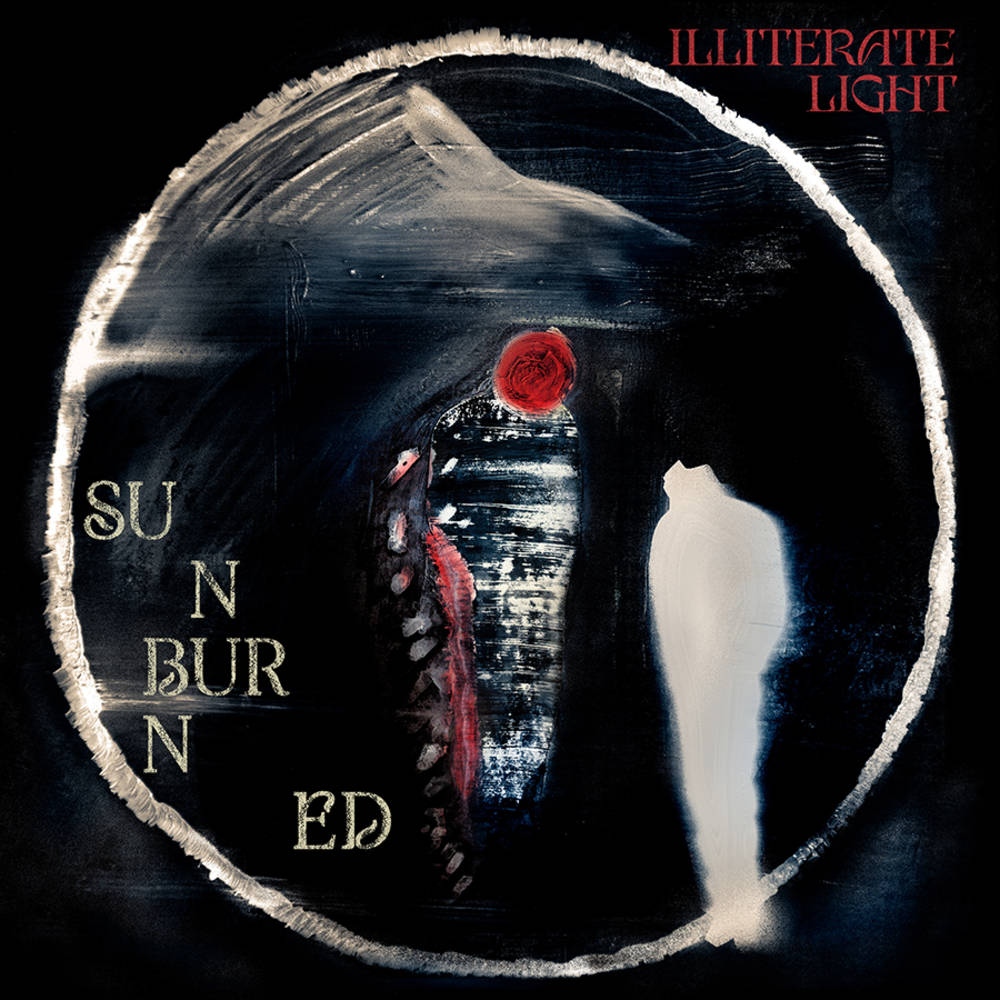 Illiterate Light thrives on subverting expectations. Though just a duo, the Harrisonburg, Virginia-based singer-guitarist Jeff Gorman along with Nashville, Tennessee-based drummer Jake Cochran make surprisingly pummeling and thoughtful alternative rock. Since the band’s 2015 inception, they’ve intently focused on their unorthodox live show with Cochran standing behind his kit and Gorman playing synth bass with his foot as he sings and strums his guitar. Fiercely egalitarian and independent, the two not only split up songwriting duties and arrangement ideas, they even built bike-powered stages: bringing the fans into the live experience and envisioning a greener future for shows.

But with their latest album Sunburned, out January 27 via Thirty Tigers, Gorman and Cochran have turned their attention inward to their songwriting and studio craft. It’s their most fully-realized and ambitious LP yet, one that’s full of immediate songs that update and revolutionize the band’s approach to making music. There are rich keyboard and programmed percussion textures now populating their songs, as well as soaringly anthemic choruses, and hefty doses of fuzz. “On our first record, we were very live-focused and wanted to make sure whatever we were writing was translated in person,” says Gorman. “Without that crutch, we could be more adventurous and take more risks. We definitely weren’t timid in the studio.”

As their writing started, Gorman’s father died after a years-long battle with multiple system atrophy (MSA). While his grief was devastating and palpable, it also gave him clarity and newfound motivation. “These songs aren't about my dad dying but there’s been such a shift in my own life that my own writing took on a certain fearlessness,” says Gorman. “I saw the thin veil between life and death and I realized there's nothing to be afraid of anymore. I wanted to embrace the things I love and the weird things that'll come to us in life. My grief found its way into the record, sonically and emotionally, but not topically.”

The songs on Sunburned find their resonance in dichotomies, the connection between light and dark, life and death, and heaven and hell. Gorman and Cochran work best in contradictions, gray areas, and difficult questions that don’t have easy answers. On single “Fuck LA,” what looks like a kiss-off to a major city is actually an anthem for the homesick as Gorman sings, “Wherever you are / Fuck that place / And come back home.” Meanwhile, “Feb 1st” captures the other side of the coin: the desperation of being stir-crazy cooped up at home. Gorman snarls, “So take me somewhere I’m a stranger / Yeah take me back to Santa Fe / And show me faces unfamiliar / Yeah show me somebody like you.”

Sunburned is an album for searchers, the people who channel the darkest energy into something healing and positive. Even on songs like the adventurous and experimental “Hellraiser,” which takes on a menacing undertone in its lyrics, Illiterate Light presents it in a way that’s universal and inviting. “This record was all about chasing a gut feeling and going for songs that had more depth and darkness and pain,” says Gorman. “We'd rather share what we're really going through and let that come out.”