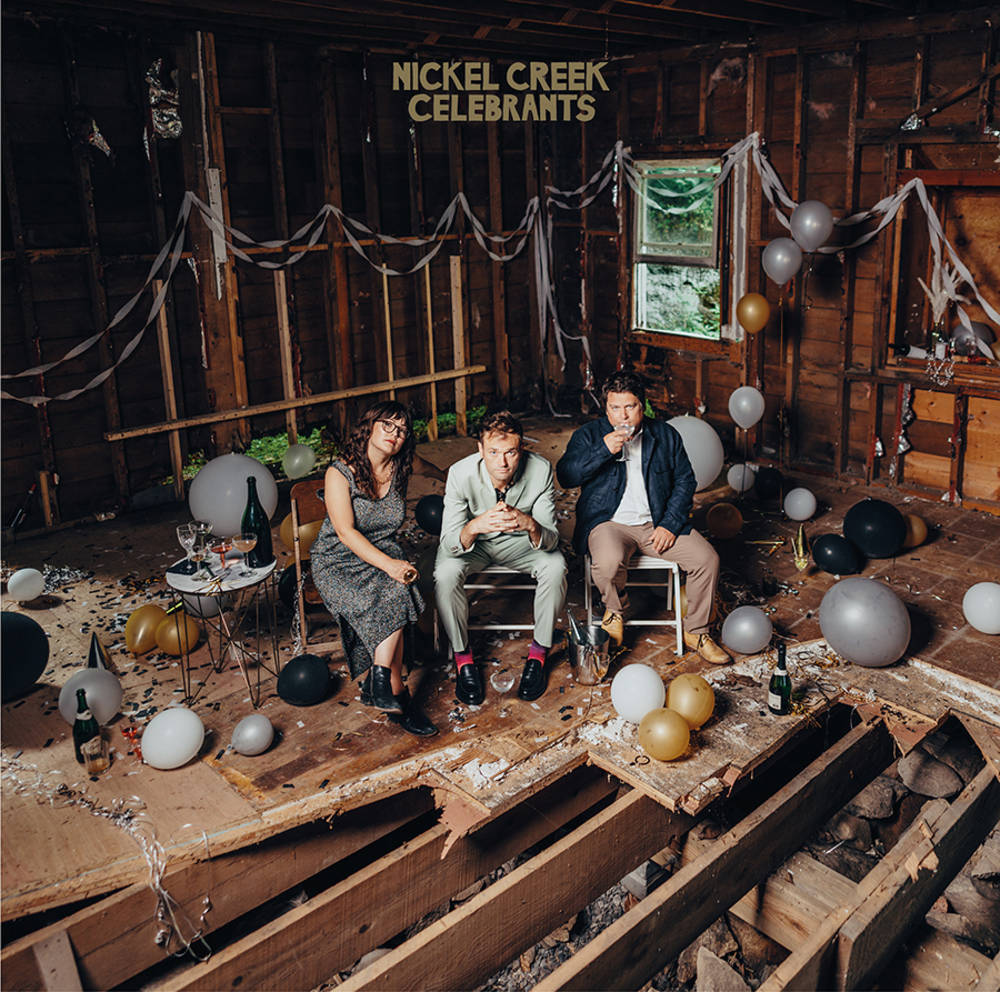 GRAMMY Award-winning trio, Nickel Creek—mandolinist Chris Thile, violinist Sara Watkins and guitarist Sean Watkins—will release Celebrants, their first new album in nine years, March 24 via Thirty Tigers. Along with the album announcement comes the song, “Strangers” - Watch the band perform the song on YouTube. Of the song, Thile shares, “This song is an exploration of the ostensibly rewarding but often awkward, even excruciating act of catching up with an old friend. Can the connection be reforged? Should it be?”

Their fifth studio album, Celebrants marks a highly anticipated return for the beloved trio and explores the inherent dynamics of human connection. Across the 18 tracks, the trio addresses love, friendship and time with lyrics both poetic and plain-spoken, as they see bridges built, crossed, burned and rebuilt. Recorded at Nashville’s RCA Studio A, the album was produced by longtime collaborator Eric Valentine (Queens of the Stone Age, Grace Potter, Weezer) and features Mike Elizondo on bass.

Of the project, the band reflects, “This is a record about embracing the friction inherent in real human connection. We begin the record yearning for and pursuing harmonious connection. We end the record having realized that truly harmonious connection can only be achieved through the dissonance that we’ve spent our entire adult lives trying to avoid.”
In celebration of the release, the band will perform three very special sold-out shows at Nashville’s historic Ryman Auditorium this spring on April 27, 28 and 29.
Together a sum of more than their staggering parts, Nickel Creek revolutionized bluegrass and folk in the early 2000s and ushered in a new era of what we now recognize as Americana music. In a 2020 retrospective entitled, “The Year Folk Broke: How Nickel Creek Made Americana The New Indie Rock,” NPR Music praised, “20 years ago this month, an album arrived that seemed to speak all these languages at once: unafraid to push the boundaries of its primary genre, and packing the musical chops to bring such an eclectic vision to life. Behind it were three musicians just barely old enough to vote” and continued, “That makes Nickel Creek and its unofficial debut a critical point along a storied timeline, one whose innovations offer countless connections between the genre’s origins and its future. Once dubbed ‘progressive newgrassers,’ the three musicians now fit firmly within the ranks of Americana music—however nebulous, layered and diverse that realm may be. They have only themselves to thank.”
After meeting as young children and subsequently earning the respect of the bluegrass circuit for a decade, the trio signed with venerable label, Sugar Hill Records, in 2000 and quickly broke through with their Grammy-nominated, Alison Krauss-produced self-titled LP. Since that effort, the trio has released three more studio albums to date: 2002’s This Side, which won Best Contemporary Folk Album at the 45th Grammy Awards, 2005’s Why Should the Fire Die? and 2014’s A Dotted Line.
Each member of Nickel Creek has also taken part in many outside projects over the years. Thile is a 2012 recipient of a MacArthur Fellowship and served as the host of the American radio variety show Live from Here (formerly A Prairie Home Companion) from 2016 to 2020. He has also released collaborative albums with world-renowned musicians like Yo-Yo Ma, Edgar Meyer, Brad Mehldau and Stuart Duncan as well as six studio albums with his Grammy-winning band, Punch Brothers. Sean Watkins is a co-founder of Watkins Family Hour alongside Sara, who has released three albums and maintains a long-running collaborative show in Los Angeles. Sean has also released a string of solo albums, while Sara’s extracurricular projects include the aforementioned Watkins Family Hour, as well as the Grammy-winning roots trio, I’m With Her, which she co-founded alongside Aoife O’Donovan and Sarah Jarosz. Sara has released four studio albums and has contributed fiddle to recordings by artists like Phoebe Bridgers, the Killers and John Mayer.