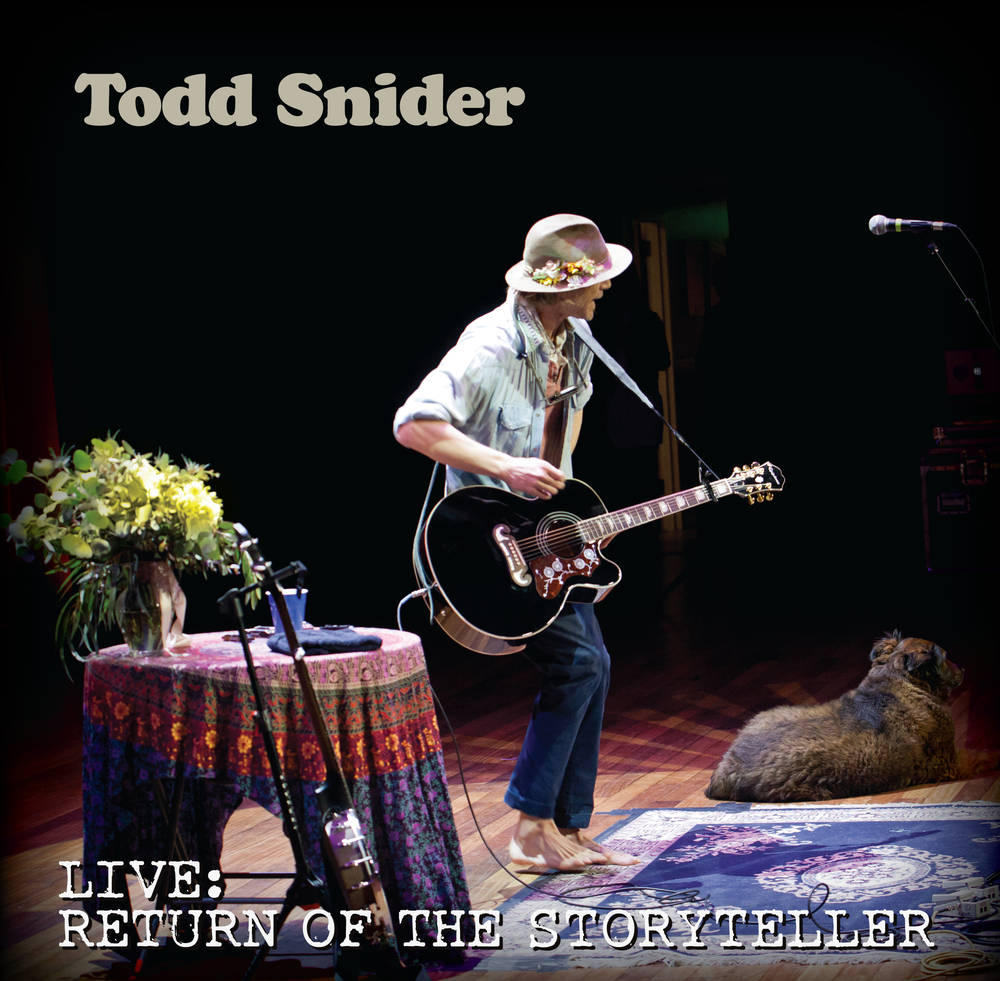 Troubadour, meaning an itinerant singer of songs, is a word that dates back centuries, and comes from the French verb “trouver,” which is to find. These musical wanderers would find and invent stories humorous and intellectual, romantic and earthy, performing them as they went from town to town. Troubadour is also the word that acclaimed musician-raconteur Todd Snider leans on to describe himself and his latest release, Live: Return of the Storyteller.

“I think my first thought with this record was I wanted to remind people really quickly that I'm a troubadour,” says Snider. “Playing live is the only chance for me to show, 'This is what I really do.' I've never thought of myself as a recording artist. I'm someone who gets over by traveling around, telling stories, making up new songs and singing them alone on stage.”

Before he even made his professional debut with Songs For The Daily Planet in 1994, Snider already knew that he wanted to be part of this time-honored tradition. “I like the romantic notion of drifting around and laughing your way through life,” he says. “Like Jim Croce or Mark Twain. I felt like I was half-doing that anyway. When I was 19, I was a real drifter and a sofa circuit person. Then when I first saw Jerry Jeff Walker and John Prine play, I became obsessed. I followed them both around like The Grateful Dead. I saw that the difference between a free spirit and a freeloader was three chords.

“And as soon as I figured that out, I knew that it would help me as a person who didn't have a plan. Just to be a busker. I didn't want to sign up for normal life. I wanted to do another thing, and then it turned into a real gig. I was really surprised. It's still funny to be getting away with it.”

That speaks to Snider's modesty about his singular talent and deep catalog of songs of every emotional stripe. Rolling Stone has called him “America's sharpest musical storyteller” while the New York Times described him as “a wryly quotable phrasemaker and worthy antagonist.” Live: Return of the Storyteller – his third live album and nineteenth overall - plays like a masterclass by one man with a guitar and a freewheeling imagination. Threading his husky-voiced phrasing through a likable cosmic cowboy manner, he invites you on a tour of tunes humorous (“Big Finish,” and the have-meets- have-not “In Between Jobs”),  Proustian (“Play a Train Song,” “Too Soon To Tell,” and the lump-in-the-throat snapshot of John Prine on “Handsome John”) and heart-worn (“Like a Force of Nature,” “The Very Last Time,” “Roman Candles”). As the fifteen-song set unfolds, you can feel a tangible bond building between Snider and his fans.

But the songs are only half of what makes the connection so compelling.

Acting as palate cleansers and putty, the stories between numbers offer colorful glimpses into Snider's interior life. Whether he's talking about being mistaken for a homeless guy in a nice hotel, searching for a song in the woods while tripping or the poetry of one of his heroes dying on stage, his spoken interludes are delivered with both meandering charm and deadly comic timing.

Snider credits an unlikely source of inspiration for both. “The comedian Richard Lewis is a friend and a mentor, and we talk almost every day,” Snider says. “We met about six or seven years ago through a drummer who's a mutual friend, and really hit it off. I feel like since I've known him, my storytelling has evolved. I don't know that I've gotten better, but a lot of the ways I approach my shows is from learning things from Richard. Especially this idea of being able to go on and on without just going on and on. To ramble without getting boring.”

Snider is also mindful about not repeating himself when he's returning to a familiar venue, which can add a tightrope quality to his performances. “On this record, when I left Nashville, I didn't know what I was going to say,” he admits. “I just knew that it couldn't be the same shit that I've said.  I was going to have to have some new stories to tell. That's how it's been for years. Then one night, I'll get up there and open my mouth and something new comes out. And then I'll just keep telling it and refining it. It happens under pressure.”

The timing of Live: Return of the Storyteller's release has extra resonance in our post-pandemic era. Snider says, “I'm glad I recorded the tour last year, because that was the sound of the country getting to see live music again. It was unique and it won't happen again. Everyone just hugs at the start of a concert - you can tell that they're glad to see each other, and then they get more excited than they used to be about just being out and seeing music. I'm sure that it will go back to normal, but it hasn't yet.”

While the album captures what Snider laughingly calls his “second tour - because I went out on the road in '94 and never went home until the pandemic” - it acts as both a summing up of a thirty-year career and a look ahead.

“I always think that being a recording artist isn't something that I've thrived at,” he says. “I have fun with it and try all different kinds of music and try to learn more and more, but the only reason I get to do it is because of the main thing I do - which is travel around by myself and sing and tell stories. That thing works. Since I was twenty, that thing has worked. People come to see me do it and I love to do it.”