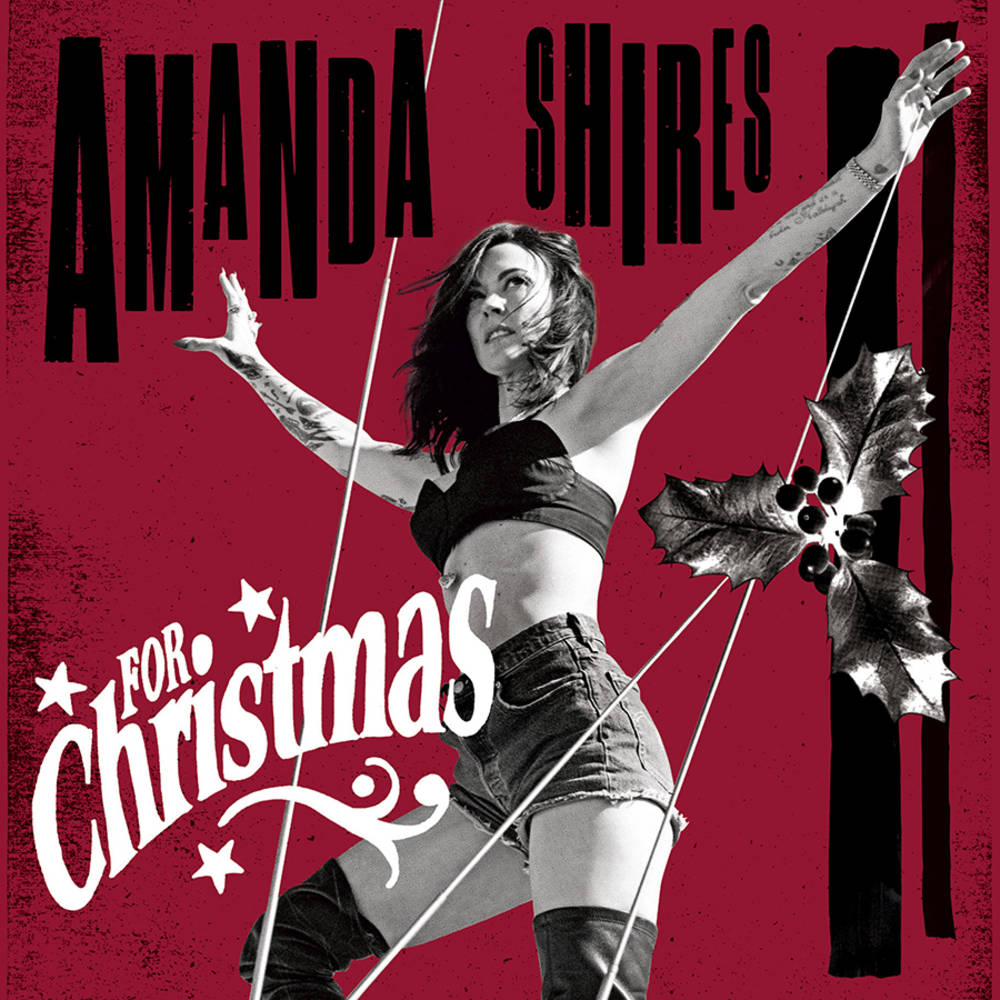 On her first-ever holiday album For Christmas, Grammy Award-winning singer/songwriter Amanda Shires invites the world into a fantastically warped wonderland of her own making. Though there’s flying reindeer and fallen tinsel and angels serenely plucking harps, Shires’s finespun storytelling sheds light on the kind of holiday experiences and emotions that often go ignored in Christmas songs: the family drama and forced cheer, burnt-out frustration and elaborate fantasies of escaping off to some far-away tropical island. Mostly made up of original material from the Texas-bred musician, the album unfolds in a selection of piano songs touched with the timeless charm of Brill Building pop—a lovely setting for the luminous vocal presence she’s brought to a series of acclaimed solo albums and to her role as a member of The Highwomen. Revealing an entirely new side of Shires’s idiosyncratic mind, the result belongs to that rare breed of holiday music that feels undeniably resonant at any season of the year.

The follow-up to 2018’s critically lauded To The Sunset, For Christmas marks the realization of a longtime dream for Shires. “I’ve always wanted to make a record that’s true to what Christmas is like for me, and all the mixed emotions that come with it,” she says. “There’s the happiness of being with family, and then the reality that getting a bunch of your family members in the same room is maybe never a great idea. I’m one of those hopeless-romantic types, so there’s the romance and beauty of Christmas but also the sadness, especially when not everybody you’re used to having around gets to be there anymore. There’s a lot of nostalgia in these songs, but there’s a lot of reality too.”

Produced by Lawrence Rothman and recorded live at Sound Emporium Studios in her homebase of Nashville, For Christmas finds Shires working with bassist Jimbo Hart (her bandmate in Jason Isbell’s 400 Unit), pianist Peter Levin (a jazz musician she met while touring with The Gregg Allman Band), guitarist Pat Buchanan (Dolly Parton, The Chicks), and drummer Fred Eltringham (Sheryl Crow, Lucinda Williams). Over the course of four hot days in July, Shires and her collaborators laid down the album’s nine original songs and two covers (including Frank Loesser’s “What Are You Doing New Year’s Eve?” and a darkly charged reimagining of “Silent Night”), infusing every track with the unbridled joy of the recording sessions. “We ate a ton of donuts and all wore Christmas hats, and the place was decked out in all these Christmas lights,” recalls Shires, who played fiddle and violin on For Christmas. “It’s hard to be in the studio sometimes, but everybody brought so much fun and humanity to the whole thing.”

Throughout For Christmas, Shires leads her audience on a whirlwind journey through the chaos of holidays, often spiking her nuanced reflection with a bit of goofball humor (“The pressure’s different when you’re writing Christmas songs as opposed to confessional songs or protest songs—there’s a chance to bring some comedy, and get more punny than normal,” she notes). Along the way, Shires presents such gems as “Blame It on the Mistletoe,” a tribute to the dizzying bliss of falling in love at holiday time (sample lyric: “I admit I was feeling a little ho-ho-hopeless/Thinking this crush was just one-sided”). One of several tracks featuring legendary gospel quartet The McCrary Sisters, the sublimely offbeat “Gone for Christmas” slinks along in a Grinch-inspired groove as Shires shares a litany of less-than-orthodox holiday wishes (“I want a date with Larry David/I want Costa Rica or the Caymans/And I want you gone for Christmas”). And on “Always Christmas Around Here,” For Christmas closes out with a riotously true-to-life portrait of the holiday’s aftermath (“A mess in the living room/There’s a wine all over the couch/My sisters aren’t speaking/Who’s crying now?”). “That song was my favorite to put together,” Shires points out. “John Prine had passed away not too long before, and he loved Christmas—he always had a Christmas tree up everywhere, even in the studio. I was thinking about all the problems that come with the holidays, and how difficult families can be, and I know I wrote a song he would say was pretty great.”

Elsewhere on For Christmas, Shires channels everything from lustful whimsy (“A Real Tree This Year”) to glorious catharsis (“Let’s Get Away”) to heavy-hearted longing (on the quietly devastating “Slow Falling Snow”). “What I wanted to do with this record was capture all of my feelings about Christmas, and I’ve still got more feelings to go—it’s so fun I might do it again,” says Shires. “I hope it helps people know that all the feelings are okay, that it’s all right to feel down on Christmas when there’s so much celebrating going on around you. And at the same time I just wanted to give everyone some Christmas songs they haven’t already heard 200,000 times before, and hopefully get them all to sing along.”