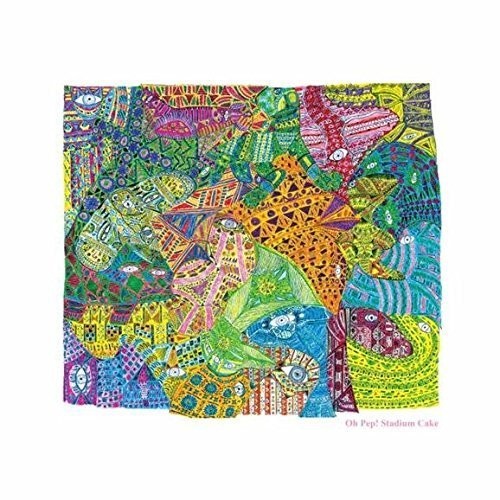 Olivia Hally and Pepita Emmerichs met in music secondary school in Melbourne, Australia, drawn together by a shared love of songs with no boundaries or expectations. The duo, now both 24, have since unveiled three EPs, but it's their debut album, Stadium Cake, that truly showcases Hally and Emmerichs' uniquely compelling collaboration.
Hally and Emmerichs decamped to Halifax, Nova Scotia to record with producer Daniel Ledwell. After initially meeting Ledwell in early 2015 and recording two tracks with him for their Living EP, Oh Pep! felt that he had the right sensibility to carry these new album songs through the recording process. The band spent their August in Ledwell's studio, and celebrated the culmination of the recording by swimming across Lake Echo, which neighbors the studio.

Stadium Cake marks the first time Oh Pep! recorded with a multi-track approach rather than recording live. They wanted to be completely open to new ideas and approaches, and to not confine themselves to preset conceptions of how the music should be made. 'Doctor Doctor', the album's first single, is a pop song with elements of the unexpected, revealing the band's interest in experimental and occasionally dissonant melodies as Hally sings 'Where is the light, for me it's the darkest night'. A sense of light and dark stitches together the tapestry of Stadium Cake, continually bringing a sense of tension to each song.
For Hally and Emmerichs, success is secondary to the actual creation of the music. They knew it was meant to be when they first dismantled a cover song together and their shared sensibility of strange, engaging approaches to music remained. Hally thinks back to that session that 'It was possibly the worst idea we could have had, but the fact that we were both so excited about drastically changing this perfectly cohesive song said a lot about who we were and how we connected...'