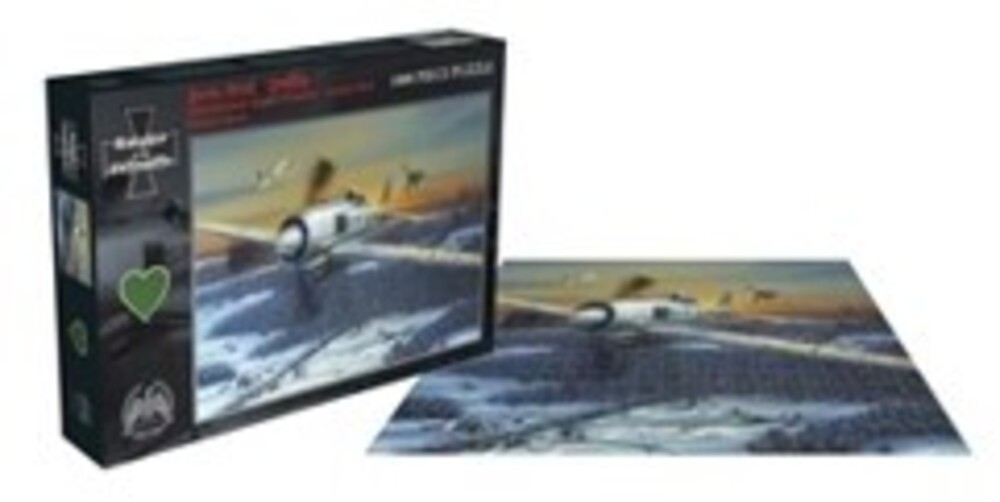 Knights Of The Luftwaffe - Focke-Wulf Fw190 - 1000 Piece Jigsaw. The Focke-Wulf Fw 190 was undoubtedly one of the best fighters of World War 2. Conceived in 1937 and designed by Kurt Tank, the Fw 190 first saw service in August 1941. The aircraft that became known as the "Butcher Bird" quickly earned a reputation as a deadly and feared aircraft. The Fw 190 was an incredibly versatile aircraft and served in roles such as fighter, interceptor, ground attack and night fighter. By early 1942 the Fw 190 fighter was up-gunned to carry two wing rooted 20 mm FF Cannon and two MG 17 machine guns. This aircraft packed a formidable punch. The RAF found the Fw 190 an unpleasant surprise in the battles over the Channel and was relieved when the much-improved Spitfire IX entered service. The number of roles, variants and workloads only increased on the Fw 190 as the war went on. Our illustration shows Oberstleutnant Hannes Trauloft's Fw 190 over the Russian steppe circa December 1942. His aircraft carries his own personal version of the unit's "Green Heart" emblem, which contained the coat of arms emblems of the home bases of JG 54's three component Gruppen, Nurnberg, Vienna-Aspern and Jesau. Hannes Trauloft had a long and colourful Luftwaffe career. He flew with the Condor Legion in the Spanish Civil War and ended his military career as a General in the post-war German Air Force. Trauloft was a Staffelkapitän (Squadron leader) of Jagdgeschwader 77 during the invasion of Poland, where he claimed his first aerial victory. Promoted to commander of Jagdgeschwader 54, he led the wing in Operation Barbarossa (the German invasion of the Soviet Union) in June 1941. He was awarded the Knight's Cross of the Iron Cross for his service on 27th July 1941