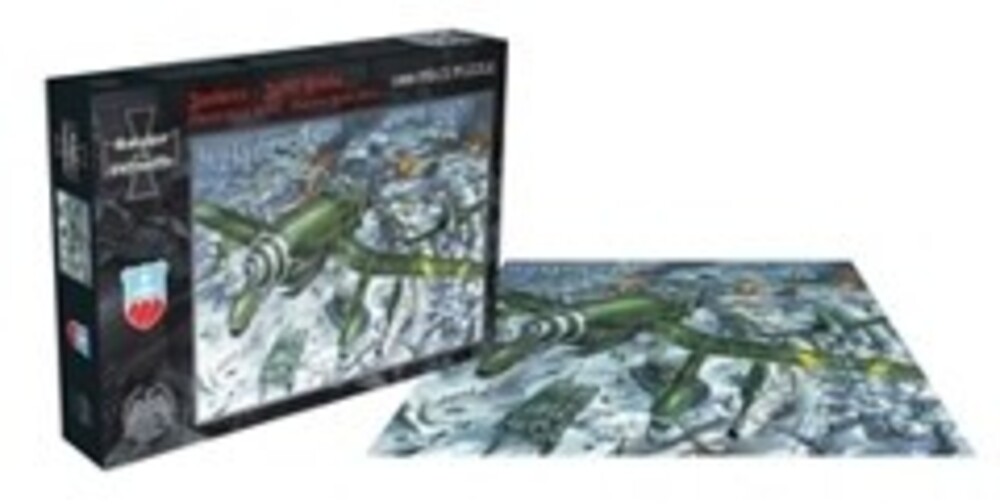 Knights Of The Luftwaffe - Messerschmitt - Me 262 - 1000 Piece Jigsaw. With the German skies full of Allied bombers (and their fighter escorts) pummelling German cities and industrial centres, the Luftwaffe's Jagdwaffe did it's best to stem the tide. Despite the destruction met out to the German aircraft industry, it was supplying the Luftwaffe with aircraft way in advance of anything the allies had, even in the experimental phase. The Messerschmitt Me 262 (nicknamed Schawalbe - "Swallow") was the first ever operational jet fighter. This aircraft was not only revolutionary, but it was also in the right hands, lethal. Armed with four Rheinmetall-Borsig MK 108A-3 Cannon and a top speed of over 500 mph, the Me 262 came as a very unpleasant shock to any Allied airman unlucky enough to cross swords with it. This illustration depicts Me 262 ace, Heinz "Pritzl" Bär, flying his "Red 13" from the Jagdwaffe unit EJG 2 (Ergänzungs-Jagdgeschwader 2) in defence of the Reich, in combat with a USAAF B-17 bomber formation in March 1945. Bär scored 220 aerial victories (96 on the Eastern Front and 124 in the Western Theatre). Sixteen of these kills came flying the Me 262. On 23rd April 1945, Bär was transferred to Adolf Galland's squadron of Experten JV 44. This unit performed well in the last weeks of the war. Against staggering odds, the unit achieved a kill ratio of 4-to-1. On April 26th, Bär assumed command of JV 44 due to injury to unit commander Adolf Galland. Bär scored his final four aerial victories with JV 44 (three USAAF P-47s and an RAF Mosquito). Heinz Bär flew over 1,000 combat missions and was awarded the Knights Cross with Oak Leaves, Swords, and Diamonds. He finished WW2 as the second highest scoring jet ace. Heinz Bär survived the war and was killed in a flying accident in 1957 at the age of 43. Heinz Bär was an exceptional solider and a true Knight of the Luftwaffe