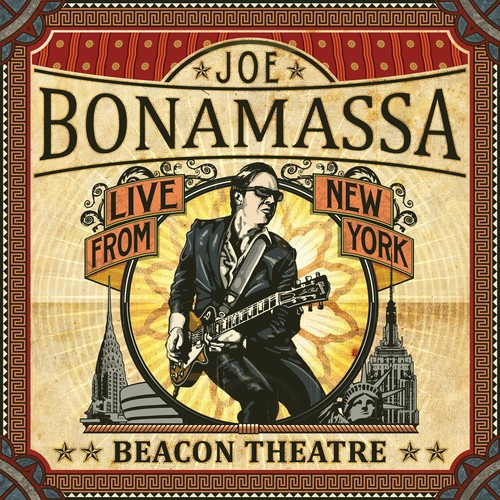 JOE BONAMASSA: BEACON THEATRE LIVE FROM NEW YORK rips through 20 songs spanning Bonamassa s career with smoky vocals complementing the guitar wizardry and rapid-fingered ease with which his fans know and love. Alongside the great chemistry he shares with his formidable bandmates Carmine Rojas (bass), Tal Bergman (drums) and Rick Melick (keyboards), the performance is mesmerizing to watch. He kicks it off with Slow Train, from 2011's solo album Dust Bowl and rolls through a number of fan-favorites including: Cradle Song, Dust Bowl, When The Fire Hits The Sea, Bird On A Wire, Blue & Evil, Mountain Time, and many more. Hart joins Bonamassa on stage for soulful duets on I'll Take Care of You and Sinner's Prayer, which is featured on the recently released Don't Explain an album of soul covers Hart recorded with Bonamassa. Hiatt, a Nashville Music Lifetime Achievement Award recipient and American Music Award (AMA) winner, joined Bonamassa for a rendition of Down Around My Place and I Know A Place. And as legendary classic rock singer Paul Rodgers (Bad Company, Free) came on stage, the crowd jumped to its feet as he and Bonamassa performed Free's Fire And Water and Walk In My Shadows.