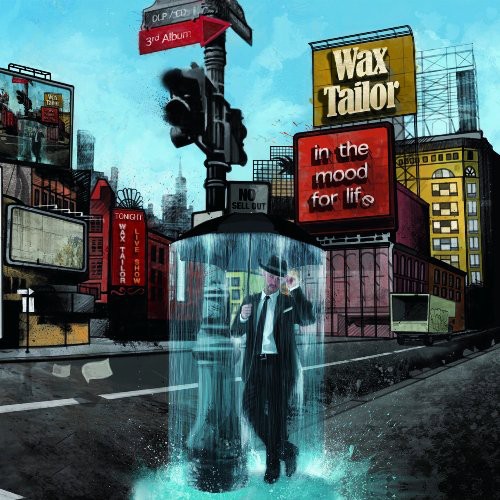 His first album "Tales of the Forgotten Melodies" drew comparisons to the likes of RJD2, Portishead and DJ Shadow, while his second "Hope & Sorrow" (80 000 sold worldwide) landed him a nomination at the prestigious Victoires de la Musiques, as well as the US Indie Awards. Wax Tailor is coming off a year which saw him tour relentlessly (over 200 concerts) and score the title track for the movie "Paris" by Cedric Klapisch as well as a few remixes (Nina Simone, ASA). He is now a well-established and respected producer. Written in both Paris and New York City, his third album "In the Mood for Life" is an organic landscape with orchestral accents. Taking it's cues from Soul, Funk, Hip-Hop or 60's Pop Music, this is one eagerly awaited 52 minute journey. Who else than this necromancer of forgotten melodies can assemble such a wide array of influences and make them coexist with such ease on Wax Tailor album melancholic melodies reminiscent of the Cocteau Twins strike a delicate balance with a brand of Hip-Hop seldom seen since the days of Jurassic 5. Wax Tailor also masters the art of reinventing oneself, and although his signature sound is immediately identifiable, this new album establishes a true evolution both in terms of production and song writing. Sting instruments, which were once just extras, now assume a more prominent role (Dry Your Eyes, Go Without Me). Where genres once crossed path from one track to another, they now collide within a track (This Train, Fireflies). The resulting sound is denser, more organic as well (Leave It, I Own You...) and the song writing more finely chiseled. With the opening notes, the mood sets the stage. Wax Tailor is now a sound stager, the director of an aural movie whose urban roots meet the perfect casting. Throughout this album, he appropriates a multitude of references with a very personal touch. His music is beyond genres and defies categorization, it is a modern brand of Pop music, designed with a rigor and an expertise that betrays the love this artist puts into his craft.