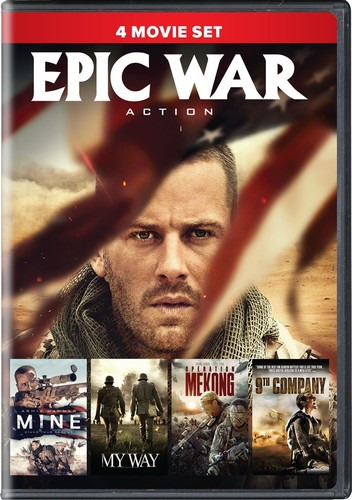 This action-packed military thriller stars Armie Hammer (FREE FIRE, THE MAN FROM U.N.C.L.E.) as a U.S. soldier who, stranded in the desert for 52 hours after a mission falls apart, must fight for survival against his enemies, the hostile environment, and the creeping psychological toll of his treacherous situation. Annabelle Wallis (ANNABELLE, THE MUMMY) and Tom Cullen (WEEKEND) co-star in this tense, explosive film from the producer of BURIED and THE CONJURING.

Two Chinese commercial vessels are ambushed while traveling down the Mekong River in the waters of the Golden Triangle, one of the largest drug manufacturing regions in the world. 13 sailors are executed at gunpoint, and 900,000 methamphetamine pills are recovered at the scene.

The Chinese government immediately sends a band of elite narcotics officers led by Captain Gao Gang (Zhang Hanyu) to the Golden Triangle to uncover the truth behind the murders. Tea field owner and Golden Triangle-based intelligence officer Fang Xinwu (Eddie Peng) joins the investigation. After it is discovered that the drugs seized on the Chinese ships had been planted by the henchman of a notorious drug cartel leader named Naw Khar, the governments of Thailand, Laos, Myanmar and China launch a joint task force to apprehend the criminal. The road to justice is, however, paved with dangerous and deadly obstacles.

Inspired by a true story. Jun Shik works for Tatsuo's grandfather's farm while Korea is colonized by Japan, but he has a dream to participate in Tokyo Olympics as a marathon runner. Tatsuo also aims to become a marathon runner, so the two are in rivalry. But war breaks out and they both are forced to enlist in the army. Tatsuo becomes the head of defense in Jun Shik's unit and he devises a scheme but fails. Jun Shik and Tatsuo are captured by the Soviets. They run away but soon are captured by Germans and forced to separate. In 1944, they meet again at the shores of Normandy.

Making of, Behind The Scenes, Interviews with Jang Dong-Gun and Director Kang Je-Kyu, Trailers

Soviet Union's powerful motion picture industry turned out hundreds of war pictures during the Cold War years, not a single one of which received a major release in the United States. Made with production resources -- full military cooperation, armies of extras -- the biggest of these pictures are said to dwarf our action spectaculars. The only catch was that the films mainly had one theme, the holy sacrifice of millions to save Mother Russia from Hitler's onslaught. Through their war films, Russians relived sentimental stories of dauntless heroes and tough military decisions that had to be made to save the nation. The Soviet experience in WW2 was nothing like our own.