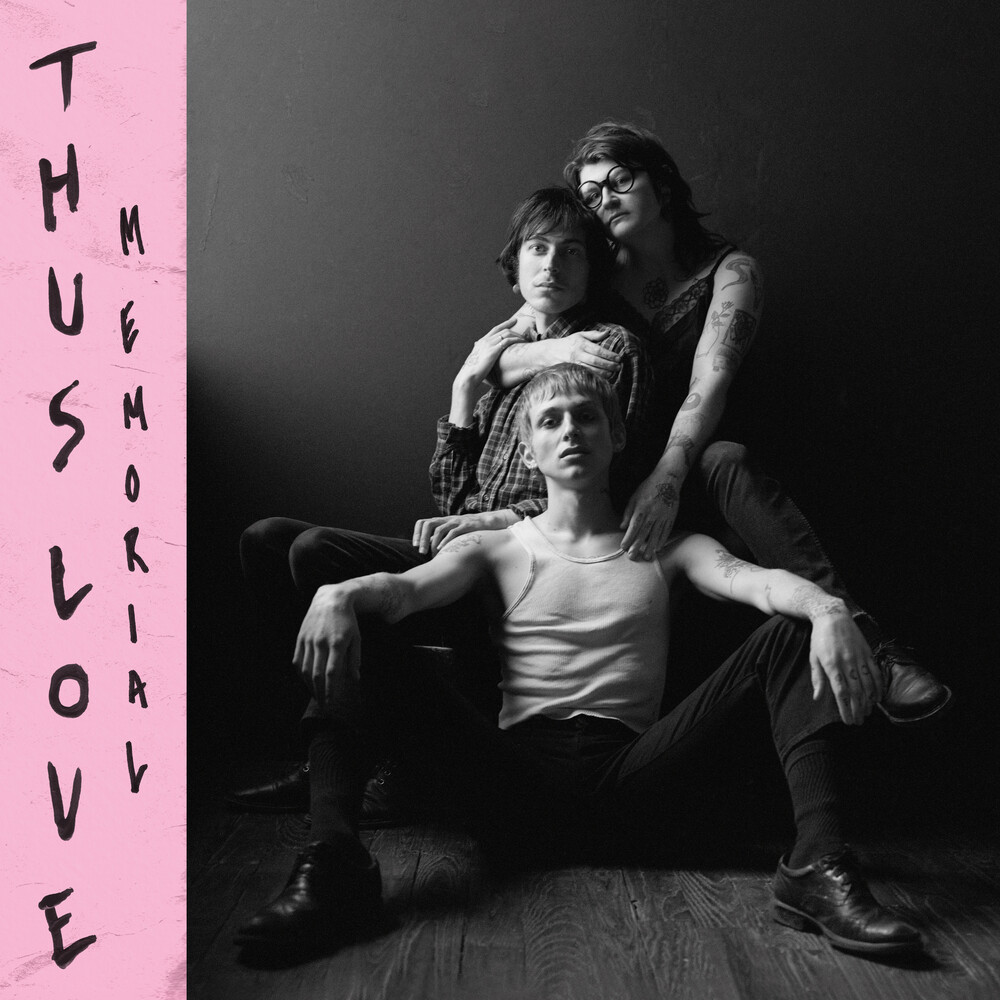 THUS LOVE is a band-but also so much more. The Brattleboro, Vermont trio stand together, a bond cemented by their experience as outsiders looking in. For THUS LOVE, DIY is an ethos that reflects not only their musical vision but their very existence as three self-identifying trans artists. From the band's inception, Echo Mars (she/her), Lu Racine (he/him) and Nathaniel van Osdol (they/them) have lived together under the same roof, designed and produced their own merch, and even created their own recording studio from scratch. "I realize that most artists don't live this way," says Mars. "But for us, it was never really a choice. The art we make is so tied to who we are and the community we're a part of, that this is the only way we can possibly do it."THUS LOVE traces it's beginnings to Mars' and Racine's serendipitous meeting at a local print shop in 2018, when the multi-instrumentalists agreed to collaborate on a new musical project. THUS LOVE's lineup clicked into place when Mars and Racine were finally able to convince their roommate van Osdol to join on bass in 2019. The band was just starting to regularly headline renowned local venue The Stone Church when everything came to a sudden and screeching halt. "The pandemic hit everyone hard, but I think it was especially difficult for new artists like us that rely on live shows to spread the word," says Racine. "At that point, we had a couple of demos and we weren't sure what the future would hold." Rather than idly wait, the band decided to take their future in their own hands. Armed with nothing but YouTube videos and her innate curiosity, Mars constructed a makeshift studio in their rented apartment above downtown Brattleboro, recording during odd hours when their next-door neighbors were out and about.Looking back now, Mars is glad the band decided to forge ahead. "I obviously would never want to go through a pandemic again, but I'm pretty confident in saying that this album would not be coming out in 2022 if we hadn't had the forced downtime." Their resulting debut, Memorial, is a stunningly accomplished album, especially considering the circumstances surrounding it's creation. The hallmarks will be unmistakable to anyone who has ever obsessed over classic LPs from indie and post-punk's progenitors-everything from the chiming, Marr-esque guitars on opener "Repitioner" to the pugnacious rhythmic punch on lead single "In Tandem". But even more impressive and exciting is how THUS LOVE manage to tap into this celebrated lineage to find their own unique voice and tell their own story."Pith & Point" and the title track, which closes the record, serve as powerful statements of purpose as the band let's down their guard to share moments of heartfelt introspection. Says Mars: "'Pith & Point' is the very first song we wrote as a band. It used to be a nearly 7 minutes when we performed it live, but it makes more sense in this condensed version on the record. It's about the sense of dread when you know something is coming but you're powerless to do anything about it. 'Memorial' is almost the flip side of the coin. There are no words but it's about making peace with what's passed." Mars is reluctant to provide additional detail out of respect for others' privacy but does allude to the deaths of several people close to the band while making the record.Although it's tempting to cast Memorial as a record dealing exclusively with grief and loss, Racine suggests that sometimes working through those feelings are the necessary precondition to true healing. He points to his own process of transition as proof. "I was in a dark place for a long time even when we were making this record. I knew what I had to do, but it didn't make it any easier. There was a long period of mourning." Racine finally completed his top surgery in September 2021, an important step in a years-long journey to embrace his true self. "Even though I was struggling at the time, the happiness I feel now makes it all worth it. I will always have positive associations with this record."Ultimately, despite the many difficulties and setbacks, the story of THUS LOVE and Memorial is one of triumph. Of seeking meaning in struggle. Of embracing community and love. Of finding joy in rebirth.