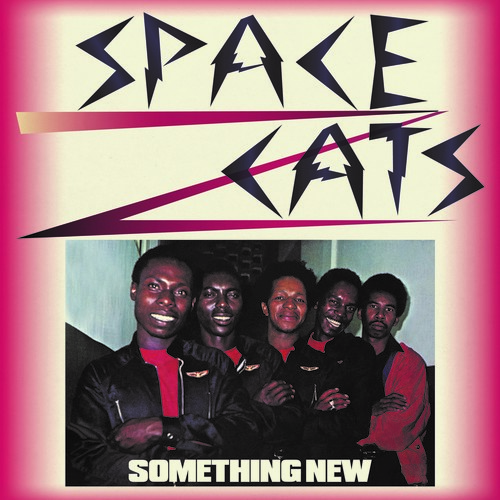 After the phenomenal response to our previous survey of disco and boogie sounds from early eighties South Africa, we decided to wade a bit deeper into the pool to focus on one of the most compelling acts to emerge from that theater, the Space Cats.

Hailing from the small, insular music scene in the coal-mining city of Witbank, the Space Cats were a five-man band fronted by singer/bassist Themba “T’Rex” Mzwakali and singer/guitarist Santy Dladala. Operating as a semi-professional live combo rather than a studio-driven aggregation, they stood out from the slick, highly polished conventions of the day. And when they took the stage they offered a take on disco that was stripped-down, raw, rugged and inspired by afro-rock groups like Harari and Hedzoleh Soundz.

While the Space Cats’ moment in the spotlight was short-lived—the band played together for barely a year before management issues necessitated a breakup—they managed to produce one endearing document of their brief career. Something New, their first and only album, released in 1981, features ten tracks of jittery, hard-edged disco-boogie-funk that capture the flavor of their performances in the rollicking dancehalls of Witbank.

Issued on the tiny Rejoice imprint, Something New had a very limited distribution reach even within South Africa and has remained heard by very few people over the last thirty-eight years. So we’re proud to make it available for the first time to the wide audience it surely deserved upon its initial release.