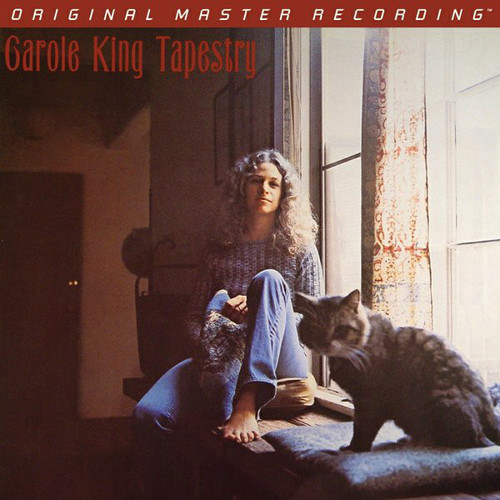 Feel the Earth Move: Mobile Fidelity Gives Listeners the End-All-Be-All Definitive Version of the Long-Time Audiophile ClassicBlockbuster Album Defined Singer-Songwriter Movement, Swept Grammy Awards, Spawned Four Hit Singles, Sold More Than 25 Million Copies WorldwideCarole King's Tapestry is one of the rare albums that immediately plays in your head the moment it's title, cover art, or songs are mentioned. Having achieved status of near-mythical proportions, it is the singer-songwriter record you'd bring to the proverbial desert island if you were limited to one choice. Renowned for it's lifelike production, Tapestry now sounds clearer, richer, and more emotional courtesy of Mobile Fidelity's 180 gram LP. Audiophiles, this is the version that brings Carole King right before your eyes and into your room.Faithful to original album producer Lou Adler's vision of making King (and not just any pianist player) appear seated and playing in front of listeners, these numbered limited-editions delivers utmost transparency, balance, warmth, intimacy, and perhaps most importantly, feeling. Aware of how many times this iconic work has been re-released, Mobile Fidelity engineers settled for nothing less than the absolute finest sonic presentation possible when mastering Tapestry from the original master tapes.Thematically, classics such as 'You've Got a Friend,' 'I Feel the Earth Move,' 'Will You Love Me Tomorrow,' and '(You Make Me Feel Like) a Natural Woman' resonate because they address universal sensibilities and the human condition. They, like all of Tapestry, are relaxed yet emancipating, strong yet mellow, comfortable yet terrifically beautiful and lastingly unique. Four major Grammy Awards, four Top 10 singles, sales of more than 25 million copies, and one of the first albums chosen for inclusion in the National Recording Registry just seem like icing on the cake.Tapestry makes you feel, and compels you to get closer to the music, and the musicians performing. It is an album of organic nuances, suggestive intents, and engaging melodies.