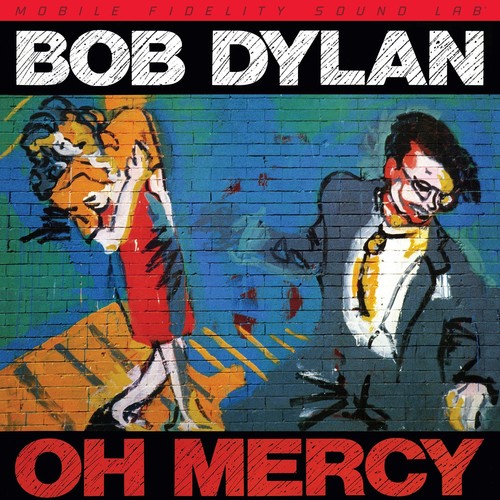 * Bob Dylan and Daniel Lanois Hit All the Right Notes on Oh Mercy: 1989 Album Mesmerizes with Brilliant Songwriting, Inspired Performances, Atmospheric Feel, and Visionary Production * Mastered on Mobile Fidelity's World-Renowned Mastering System, Reissues Feature Cinematic Sound and Vast Spaciousness: Strictly Limited to 3,000 Numbered Copies on Hybrid SACD * On-the-Floor Immediacy Mixes with Soul-Penetrating Lyrics: Record Includes Barbed 'Political World,' Quizzical 'What Good Am I?,' and Somber 'Most of the Time' As soon as it was released, Bob Dylan's Oh Mercy was rightly regarded as a striking return to form. The 1989 set also won acclaim for the singer's decision to pair with of-the-moment producer Daniel Lanois, whose sonic guidance draws vivid colors, hues, and warmth from the songs-all the while adding ambience, effect, and context. For all of Lanois' magic, it's impossible to overlook the brilliance of Dylan's lyrics and singing. Many tracks on Oh Mercyhave gone onto become live staples, and for very good reason. The swampy 'Everything Is Broken' finds Dylan at his most forthright and descriptive, with the direct account of estrangement, loss, and chaos applicable to any number of eras, situations, or regimes. On the equally spellbinding 'Man in the Long Black Coat,' themes of mystery, voodoo, and portent mingle with spooky devices designed to 'make an attack on your most vulnerable spots.' Mastered on Mobile Fidelity's world-renowned mastering system, and strictly limited to 4,000 numbered copies on 180g 2LP and 3,000 numbered copies on hybrid SACD, these reissues allow Oh Mercy to take on cinematic qualities worthy of Lanois' production and Dylan's performances. The music benefits from a spaciousness, tonality, and surrealism no prior edition delivers. The record's clarity, dynamics, and extension also reach new heights throughout. Achieving a cohesiveness and richness absent from the iconic artist's other 80s efforts, Oh Mercy further stands out for it's on-thefloor immediacy and nuanced treatments. Now, you can finally hear it unfold as Dylan and Lanois always intended.