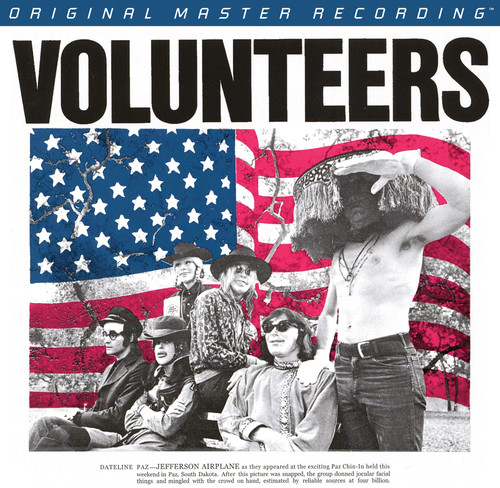 Limited double 180gm vinyl LP reissue pressed at 45RPM. Awash in controversy and loaded with revolutionary protest, Jefferson Airplane's Volunteers stands as the last album made by the group's classic lineup and brings insurgent closure to the peace-and-love era. The potent 1969 record confronts war, politics, greed, and environmental ruin in head-on fashion matched by few peers. Steeped in the belief people and music could transform the world, it steers the band in community-minded and county-rock directions, and features charged playing by guest luminaries such as Jerry Garcia, Stephen Stills, David Crosby, and Nicky Hopkins. Volunteers also benefits from being one of the first 16-track recordings. And now, the historic set can be heard in the fidelity the artists and producers intended. Mastered from the original master tapes and pressed at RTI, Mobile Fidelity's Volunteers teems with soul-affirming energy, dynamics, immediacy, and standout textures. The wider and deeper grooves translate into finer pacing, enhanced information retrieval, and superior transparency. Soundstages stretch far and extend back, with instrumental separation giving all of the musicians their own place in the mix. As a result, subtle albeit important details - Hopkins' rollicking piano, guitarist Norma Kaukonen's biting tones, Garcia's deft pedal-steel work - emerge in three-dimensional fashion amidst a musical canvas that manages to be both edgy and produced, raw and revealing. Jefferson Airplane has never sounded more vital.