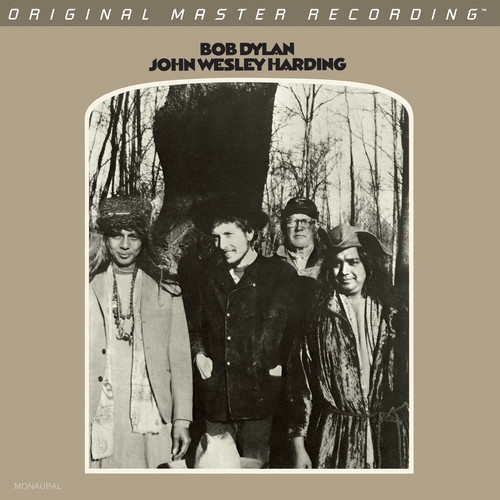 Limited Mobile Fidelity double 180gm vinyl LP edition of the mono version of this classic album pressed at 45RPM. Leave it to Bob Dylan to follow three of the most pioneering electric-based albums in history by deviating from the norm and straying from expectation - but continuing to work in the mono format. Hinting at a return to his folk roots and firmly pointing toward the field that became country rock, John Wesley Harding breathes with reassurance and freshness, the unobtrusive sound of an artist re-engaging with the past, forging a future, and stepping into new realms after recovering from an accident and unimaginable pressure. Mastered from the original master tapes, pressed at RTI, and strictly limited to 3,000 copies, this restored mono version presents the 1967 album with finite details and in the original sound Dylan intended. Immediately notable for the slimmed-down instrumentation, brisk flow, and simple approach, the record continues to endure via a rustic, era-defying naturalism tied to the organic sounds and warm production swathing Dylan's acoustic guitar, mellow voice, breezy harmonica, and minor accompaniments. All these traits translate with incredible realism and lifelike air on this reissue, which also brings out the low end of Charlie McCoy's bass with previously unheard character. With the advantage of wider and deeper grooves, the 45RPM pressing also affords the opportunity to detect more information and lavish in the extra richness. The preferred mix at the time of the recording, the mono version presents Dylan with unparalleled directness. Since the separation of the stereo versions isn't as sharp, this mono edition places Dylan's vocals in the heart of the musical action and as one with the all-star accompaniment. It paints listeners an incredibly accurate portrait of the attention-getting, concrete mass of sound that features no artificial panning and straight-ahead immersion into the music. As much as any Dylan record, the music here fits the mono spectrum to a proverbial 't.'