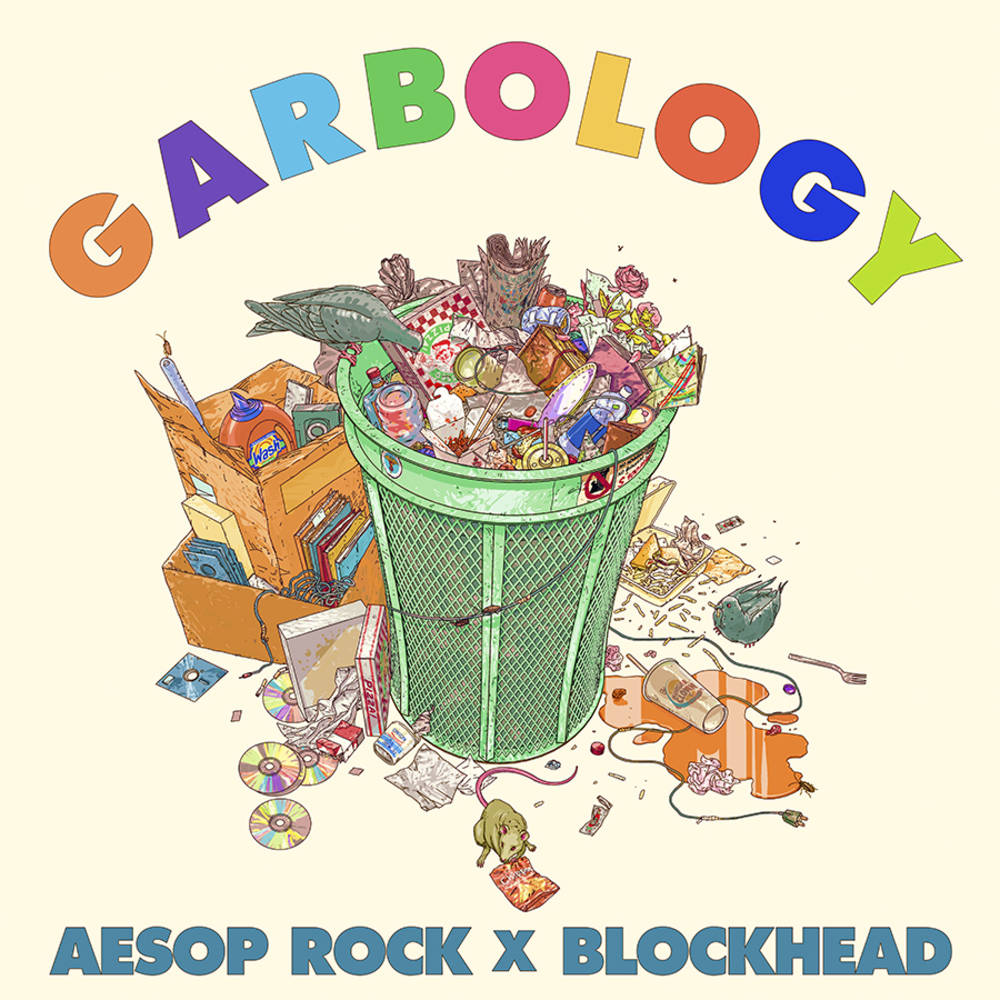 When Aesop Rock debuted in the late 90s with Music For Earthworms and Appleseed, Blockhead was also a part of the process, not only as a producer, but also helping coordinate sales of the CDRs to hungry Hip Hop fans. Blockhead and Aesop continued to collaborate, creating an impressive list of songs along the way, including two of Aesop’s most popular songs to date; “Daylight” and “None Shall Pass”. In recent years, Blockhead has contributed production, as well as remixes, to many of Aesop’s solo releases and group projects, and Aesop has made a handful of guest features on Blockhead’s solo projects, but in all that time, Aesop and Block have never done a full album together, until now!

Garbology came together over the course of the pandemic, as well as in the midst of Aesop processing the loss of a close friend in January of 2020, resulting in a period of time of feeling uncreative. Looking back on that time that feels both like yesterday and forever-ago, Aesop recalls, “The world got real weird during those months. I knew at some point I had to get back to making something. Make a beat. Draw a picture. Write. Just go. But the idea of making a beat felt like math homework, and drawing is just so hard. Writing is hard too, but at some point I had to pick one.” With writing as the chosen path, Aesop hit up Blockhead to send over some beats. At the beginning there wasn’t a plan for an album, or any particular plan beyond creating some songs. However, it wasn’t long before one song became a few, and then a handful, until finally an album was born.

Garbology encapsulates the soundtrack of current times, capturing a snapshot of Aes and Block expressing a means of entertaining themselves in the midst of less social interactions than usual, “anchored on a goulash of cabin fever, fear, anger and boredom”, as Aesop describes it.

As for the album title, Aesop explains, “Garbology is defined as the study of the material discarded by a society to learn what it reveals about social or cultural patterns. I find a lot of parallels between that and the idea of picking up the pieces after a loss or period of intense unrest, and seeing what’s really there. It’s information that speaks to who I am, who we are, and how we move forward. Furthermore - the idea of digging through old, often neglected music from another time with an ear tuned for taking in that data in a different way than your average listener would is exactly what Tony does. Go through the information and see what you find.”