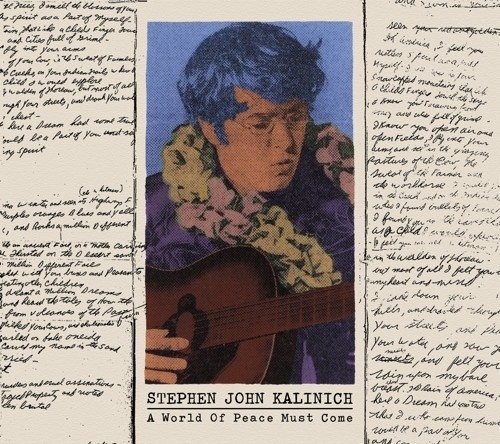 Long-lost psych poetry album from Beach Boys songwriter"A World Of Peace Must Come is his masterpiece. That was fantastic." - Brian Wilson Booklet featuring liner notes by Beach Boy archivist Alan Boyd, unseen photos, archival material, and full lyrics Record Store Day exclusive featuring hand-numbered “tip-on” jacket and three color wax variants "'Be Still' is the only song I've ever heard that made me want to be a better person." - Brian Barr, The Seattle Weekly "The only other artist as pure as him is Captain Beefheart." - Bill Bentley Stephen John Kalinich was born in Endicott, New York and grew up in Binghamton. In his early teens, he stared writing poems and articles about World Peace. He first came to California around 1964, fell in love with it, and promptly transferred from Harper College in upstate New York to UCLA. Kalinich found himself immersed in the vibrant anti-War culture of late 60’s California, often writing songs and poems against the War. He found a musical partner and kindred spirit in Mark Lindsey Buckingham. They cut a demo for a track called "Leaves of Grass," inspired by the famous Walt Whitman poem "Leaves Of Grass", and Kalinich started taking demos around. In the mid 60s, it was either at Brother Records or while pumping gas that Kalinich first met the Beach Boys. He hit it off with Brian, Carl and Dennis right away. As the first artist signed to the Beach Boys new label Brother Records, Carl Wilson produced a record for him. His first songs that saw release were "Little Bird" and "Be Still," which he wrote with Dennis and were released on the Friends album. His relationship with Dennis would lead to a number of further collaborations and Kalinich / Dennis Wilson co-writes, including: 20/20 - "All I Want To Do," Hawthorne, CA - "A Time to Live in Dreams", Pacific Ocean Blue - "Rainbows," and Bambu - "Love Remember Me.” A World of Peace Must Come was recorded at various LA studios and Brian's house in Bel-Air in 1969. The tapes were promptly lost, not to be heard again until our discovery of them in 2008. Following the CD-only reissue in that year, this is the first time this timeless snapshot of an era and an ethos will be available on vinyl for Record Store Day 2014.