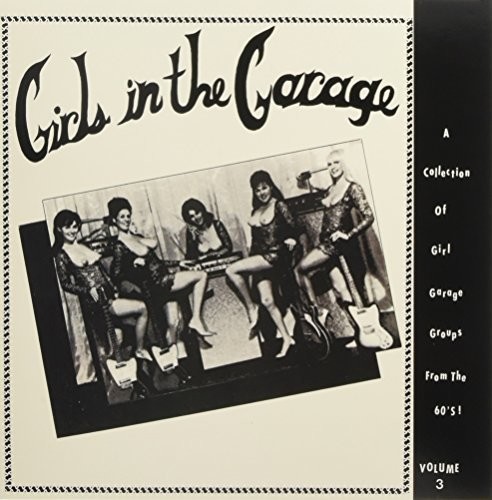 Prior to Joan Jett, Patti Smith, Courtney Love and other era-defining Women in rock, there were the girls in the garage. Like their male counterparts discovered, being in a band was not only cool and alluring, it was sexual and ultimately political, but without the statement. The garage band was a medium that enabled their voices to be heard, and these girls weren’t gonna be kept in the kitchen! Like Pebbles did for the boys, Girls In the Garage captures the raw essence of those juvenile dreams played out through guitars, drums, mics and amplifiers. Prevailing gender roles would be tested as rock ‘n’ roll became someone else’s domain…..the girls!!

A1 Laurie: Everyone Will Know A2 Luv'd Ones: I'm Leaving You A3 Luv'd Ones: Yeah, I'm Feelin' Fine A4 Heartbeats: Cryin' Inside A5 Patti's Groove: It Won't Last Too Long A6 The Liverbirds: Diddley Daddy A7 The Liverbirds: Why Do You Hang Around Me A8 The Plommons: Last Train To Liverpool B1 Mandy & The Girlfriends: Straight Shooter B2 Mandy & The Girlfriends: Money B3 Jean & The Statesides: Putty In Your Hands B4 The Tone Benders: Little Black Egg B5 Las Dilly Sisters: Sometimes Good Guys Don't Wear White B6 Jacqueline Taieb: 7:00 AM B7 Ace Of Cups: Grass Is Always Greener