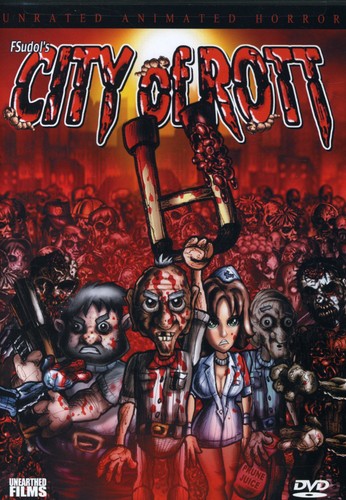 On Sale: $10.99
Fred, an old man mysteriously losing all touch with reality, clutches his walker tightly as the moans of worm-infested zombies draw closer. Suddenly, from behind the alley dozens appear. Quickly, Fred lifts his walker and wages into battle, bludgeoning as many mindless dead that dare stand in his way. Having survived numerous attacks, Fred continues on his mindless quest to find a new pair of shoes. Yes, a pair of shoes. He's crazy, and has lost touch with reality in his self-destructive mission, driving him into the dead heart of the City of Rott. Soon, he meets up with a beautiful nurse, a gun-toting fighter named Jon, and another strange old wanderer, who all determine Fred is definitely out of his mind, leaving him once again to fend off the parasitic zombie plague alone, in the worst place on earth... The City of Rott. The zombie casualties are too many to count in one of the first Animated Zombie Gorefests on DVD, City of Rott. Blended with a twist-filled but simple storyline, bucket loads of zombie mayhem and gore, and developed characters, COR will thrill Zombie-goers like never before.