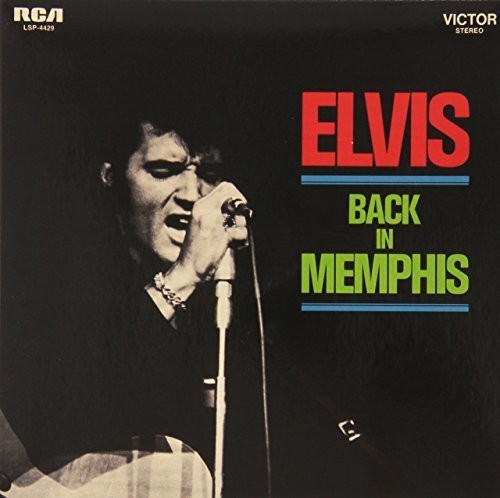 As 1970 began, Elvis returned to the studios of Memphis and would go on to record his smash album "Back In Memphis." Ever proving that he was indeed on top of his game, the amazing album featured a treasure trove of his most soulful works like "Inherit The Wind" and "Stranger In My Own Town." "Back In Memphis" soon went on to achieve gold and platinum status and become one of his most memorable titles in his huge arsenal of masterful albums. - In honor of the Man, the Music, the Legend, the King Of Rock And Roll, Friday Music is very proud and honored to announce the first time limited Anniversary Edition 180 Gram Audiophile Vinyl release of the RCA Victor classic "Back In Memphis" by Elvis Presley. - As another installment in our exciting Elvis Presley/Friday Music 180 Gram Audiophile Vinyl Series, we are pleased to present this masterwork in all it's stereophonic glory. - Mastered impeccably by Joe Reagoso at Friday Music Studios and manufactured for a very limited time at R.T.I. on first time translucent gold vinyl, Elvis' "Back In Memphis" will be a much anticipated first time audiophile dream release for Elvis fans everywhere! - Elvis Presley's... "Back In Memphis"... A history making rock album from an historic legend, an original stereophonic first time audiophile dream release... first time gatefold cover including a striking 24" x 24" poster... is now an audiophile gold vinyl dream come true... From your friends at Friday Music... FEATURED MUSICIANS: Elvis Presley, Bass - Mike Leech, Tommy Cogbill Drums - Gene Chrisman Guitar - Reggie Young Guitar [Steel] - John Hughey Harmonica - Ed Kollis Horns - The Memphis Horns Organ - Bobby Emmons Piano - Bobby Wood Producer - Chips Moman, Felton Jarvis