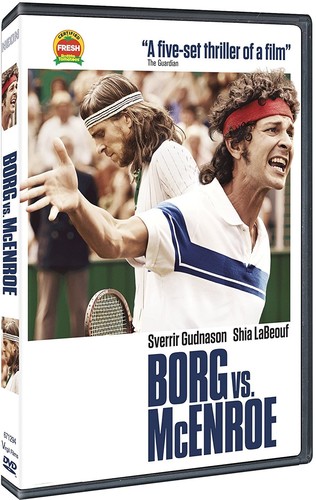 Featuring a tour-de-force performance from Shia LaBeouf as tennis great John McEnroe, the kinetic sports thriller BORG VS. MCENROE is based on the dramatic true events behind one of the sport's most famous rivalries.

At the historic 1980 Wimbledon Championships, rising American star McEnroe sets his sights on dethroning reigning champion Björn Borg, sparking an unprecedented media frenzy in the tennis world. At the center of the hype, two legendary tennis icons' with polar opposite personas and approaches to the game; McEnroe, infamous for his brash, ferocious energy on the court and his equally spectacular, expletive-fueled tantrums, versus Borg's coolly composed, elegant style of play which complements his unflappable public demeanor. However, both men are hiding deep anxieties, locked in battle with their inner demons. On the court, each athlete brings his immense talents -- and handicaps -- to bear in one of the most suspenseful events in sports history.