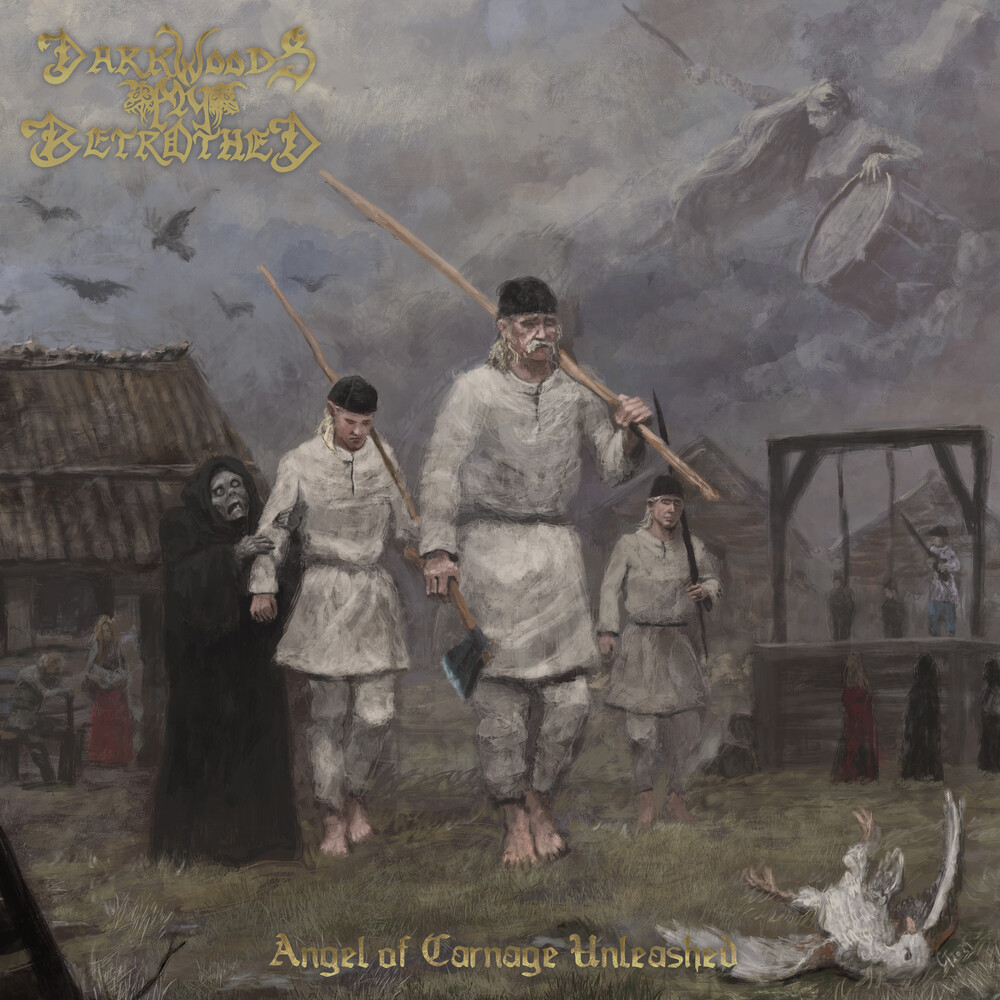 After 23 years of silence, the Finnish cult black metallers and pioneers of the scene Darkwoods My Betrothed mark their long-awaited comeback with a hard-hitting new offering, Angel of Carnage Unleashed, to be released on November 12, 2021 via Napalm Records. The old horde from the original 1993 line-up has rejoined forces, now augmented by Tuomas Holopainen as a full member of the band and Kai Hahto (both Nightwish) as session drummer. Holopainen had already been featured as a session keyboardist on all previous albums. Founded in 1993 in Kitee, Finland, Darkwoods My Betrothed quickly gained a cult status in the black metal underground. In 1995, they released their debut album, Heirs of the Northstar, followed by the sophomore album Autumn Roars Thunder (1996) and it's sequel Witch-Hunts (1998). Shortly after the release of the third album, the pagan flame of Darkwoods My Betrothed became but a fleeting glimpse in the nocturnal darkness of Eastern Finland. But it never faded away completely. Now the primeval Northern force is back with Angel of Carnage Unleashed. Angel of Carnage Unleashed sets free a unique blend of brutal, fast driven black metal and epic anthems, where eerie screams merge with heroic clean vocals, monumental choirs and majestic keyboards along with gory stories of famine, war, plague and the inescapable brutality of Finland's nature in the characteristic Darkwoods My Betrothed style! The opener "Name the Dead" sets off with atmospheric organ tunes but leaves no scope for weakness, as only a few seconds later storming drums, aggressive riffs and raging growls set the stage for everything that is about to come: brutal soundscapes spliced with epic accents! The second track "In Evil, Sickness and in Grief" pierces through the core with a poisoning vocal attack and contrasting operatic female background layers. "Murktide and Midnight Sun" marks some folk and Viking reminiscence with it's clean and catchy vocal presentation, grand choirs and mystic atmosphere, followed by the heavily stomping "You Bitter Source of Sorrow" and "Where We Dwell" with it's haunting, all-consuming keyboard passages. "In Thrall to Ironskull's Heart" showcases the multifaceted character of Darkwoods My Betrothed with an almost balladic start, which evolves into an uptempo epic journey into the Battle of Napue (1714). The title of the penultimate track "Massacre" conveys the track's musical direction with precision: expect in-your-face blastbeats and gory lyrics. The final song "Black Fog and Poison Wind" unleashes a sonic monster once more, combining aggression, haunting soundscapes and evil melodies, before Angel of Carnage Unleashed ends with the tunes of a soundtrack-like outro. The new full-length contains eight songs, written by the three musicians who founded the band in 1993: Pasi Kankkunen, Jouni Mikkonen and Teemu Kautonen (with substantial creative inputs from the fourth member Tuomas Holopainen). The lyrics are based on the human history of the Great Northern War of 1700-1721: how Finns experienced the many manifestations of the Angel of Carnage, sent by God to punish them for their sins. On August 30, 1721, the Treaty of Uusikaupunki ended the Great Northern War and put the Angel of Carnage to rest. 300 years later she is to be unleashed again - more vicious than ever!