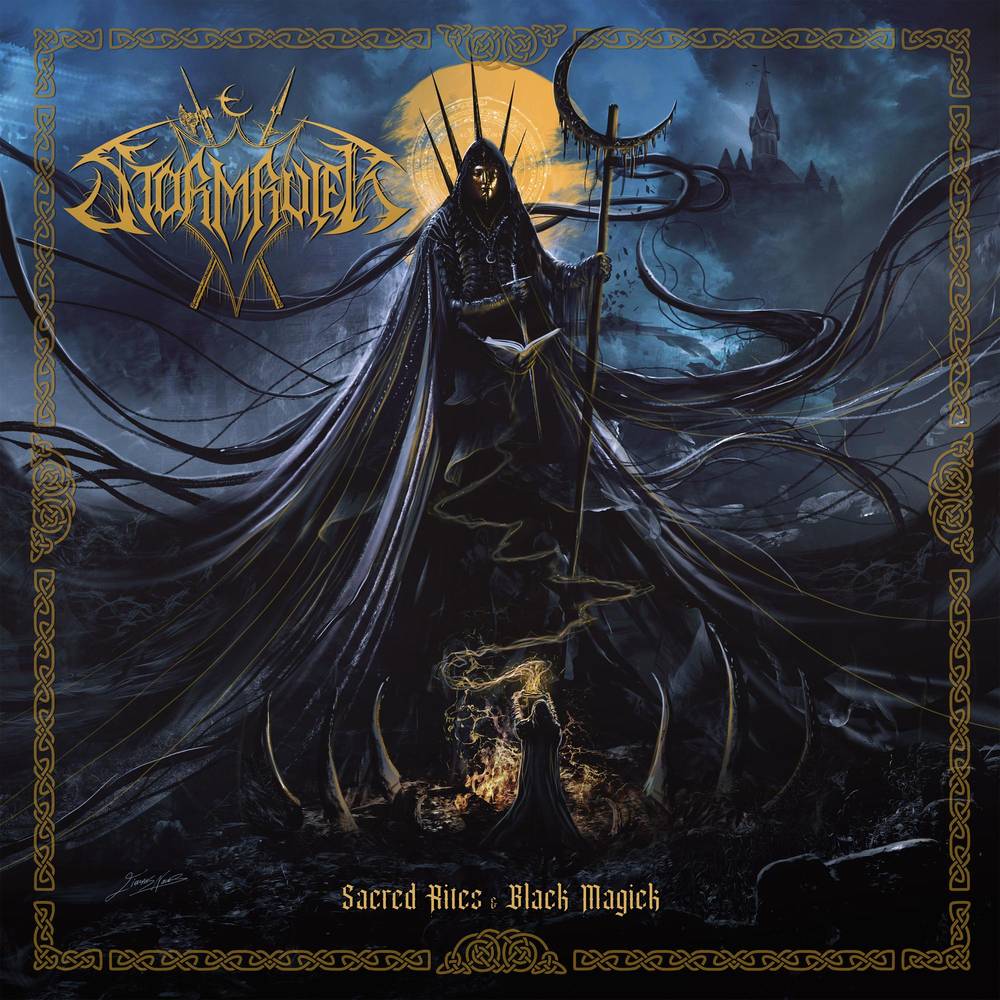 DISC: 1
1. Hymns Of The Slumbering Race
2. Internal Fulmination Of The Grand Deceivers
3. Adrift Dark Halls Of Vinheim
4. To Bear The Twin Faces Of The Dragon
5. In Light Of Paleblood
6. Entranced Within The Moon Presence
7. Invocation Of The Black Sacrament
8. Sacred Rites & Black Magick
9. Oathpact
10. Ten Heralds, Ten Desolations
11. The Waters Of Iolamita
12. In The Shaded Vlasian Forest
13. Amid A Smear Of Crimson Cloud
14. Apparitions Across The Ravencrest
15. Sanguinare Vampiris
16. Upon Frozen Shores
17. Shadow Of The Golden Eagle
18. Along The Appian Way
19. By Winters Long Passed
20. A Malice Dead & Cold

As on Under A Burning Eclipse, between each song on Sacred Rites & Black Magick is an intricately positioned interlude building the ambiance and steering the thematic intensity of the album. Beginning with echoing, clean dual acoustic guitars, introductory interlude “Hymns Of The Slumbering Race” begins the procession of grand ascension and hair raising riffage to come. “Internal Fulmination Of The Grand Deceivers” flashes STORMRULER’s brand of Imperial Black Metal Warfare, shining with heavy bass and blastbeats before cascading into icy atmosphere topped by smoke-cloaked vocals. Entrancing guitars match an ebb and flow of carefully paced interludes and merciless, speeding fury, showcasing standout leads and a blazing solo. Similar epic songwriting, lush lyricism and skillful dynamics can be witnessed on tracks such as the brooding “Entranced Within The Moon Presence”, intricate “In The Shaded Vlasian Forest” and introspective, glistening “Along The Appian Way”. “To Bear The Twin Faces Of The Dragon” stages some of the most menacing sonic escapades and memorable leads of the 20-track offering, combining chants of sorcery with searing screams and waves of crushing melody, while tracks such as “Upon Frozen Shores” weave a sonic tale of occult doom atop triumphant soundscapes, breakneck rhythms and ghostly melodic passages. Standout title offering “Sacred Rites & Black Magick” sets the supreme lyrical and musical mood of the album itself, depicting just how deftly STORMRULER conjure lucid black metal as they inject energetic, unforgettable grooves and riffs into their scorching delivery – succeeding in convincing even the newest of genre converts. Closing battle opus “A Malice Dead & Cold” wraps the album with some of its most threatening riffs and heroic leads, fittingly drawing the curtain on the band’s sophomore excursion. Produced, mixed and mastered by Gabe Usery at Encapsulated Studios and featuring stunning artwork by Giannis Nakos of Remedy Art Design, Sacred Rites & Black Magick weaves epic tales of war, history, black magick and sorcery beyond the standard confines of black metal, birthing an unforgettable conceptual journey of legend that any metal fan would be remiss to ignore.