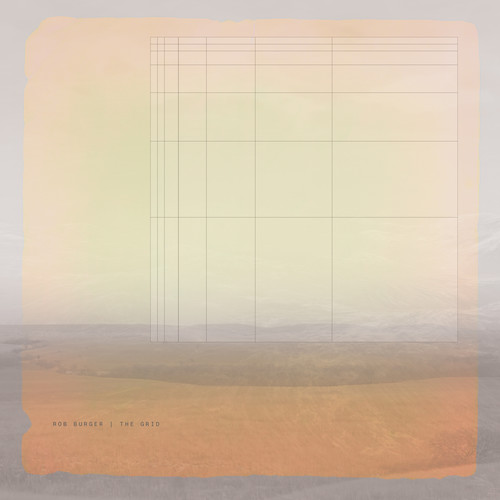 Rob Burger's talents as an arranger, composer, and keyboardist have been nurtured by more than two decades of contributions to a diverse roster of recognizable names, at the very least including John Zorn, Laurie Anderson, and Iron & Wine with whom Burger presently records and tours. His new album The Grid combines neo-classical soundscapes, '70s kosmische, and jaunts of 20th-century exotica into a completely unique genre-quilt that synopsizes his long musical trek through multiple cities, scenes, and sounds. A lifelong musician, Rob began learning piano at age four and would go on to study under jazz luminaries Max Roach, Archie Shepp, and Yusef Lateef at the University of Massachusetts. As if his formal education weren't impressive on it's own, his informal one consisted of frequent visits to New York City creative hubs The Knitting Factory, and The Kitchen, where Burger became a fly on the wall to the likes of Arthur Russell, David Byrne, and Laurie Anderson (In a cosmic closing of the loop, Burger would go on to contribute to Anderson's 2010 album Homeland, and here she appears on The Grid's ninth track "Souls of Winter"). With the avant-garde door having long been kicked open, Burger relocated to the Bay and made a lasting impression upon the area's music scene with his group Tin Hat Trio, while furthering his session and film-score work adjacently. When that group disbanded in the early '00s Burger found himself back in NYC where playing a Neil Young tribute show would entwine his path with that of Sam Beam- aka Iron & Wine. From then on, Burger has been an inextricable component of Beam's live band and discography spanning from 2007's The Shepherd's Dog to 2017's Beast Epic. Somewhere in the interim between those titles, the growth of Burger's family and his yearning for quieter climes led him to Portland, Oregon, where he built a studio, amassed an enviable collection of vintage keyboards, and began sowing the seeds of The Grid. Burger's mysteriously upturning chord-changes express depth and melancholy without ever fully straying from a sense of curiosity and charm making the somber moments believable and palatable, as indicated in the album's first moments. The Grid rolls in on a cloud bank of old-world sorrow with it's piano and accordion prologue "Alternate Star," but by the initial note of the second-track "Harmonious Gathering" all the sonic elements- dusty drum machines, choral keyboard patches, and rubberized synth bass- seem to be smiling in glorious unison. This song, as well as the title track that shortly follows it, hint at what it might sound like if Harmonia had stayed intact and were scoring A24 films. Throughout the album, The Grid captures the undeniably exploratory spirit of a lifelong sound-seeker who can't help but let his enthusiasm for the process- and all that leads up to it- bleed into his work.