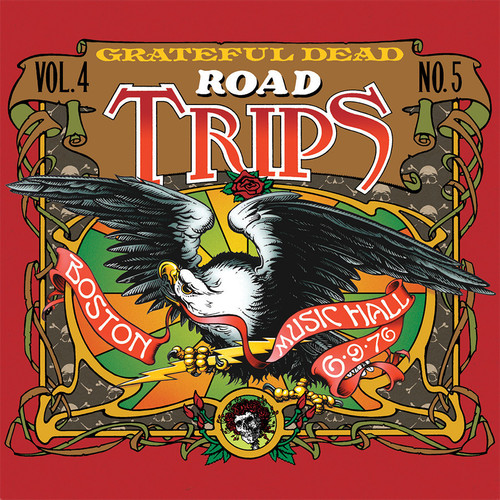 It was our great honor at Real Gone Music to issue all 36 volumes of Dick’s Picks, the Grateful Dead’s landmark live concert series; over the four and a half years it took us to release all three dozen titles, we sometimes felt like we were on the greatest Dead tour ever, every single show a classic! Well, our diligence in releasing Dick’s Picks has had a “Ripple” effect, for now the band is entrusting us with releasing its subsequent live concert series, Road Trips! Unlike Dick’s Picks, which saw about two-thirds of its titles go to regular retail in their original incarnations, NONE of the entries in the Road Trips series were offered to retail outlets outside of the Dead’s own website. Since it worked so well with Dick’s Picks, we are reissuing the last titles first, and we have enlisted the series’ original designer, Steve Vance, to convert the original wallet packaging to customer-friendly triple-CD jewel cases. This volume, the last entry in the Road Trips series, revisits June 1976, when the Dead ended its 20-month hiatus from touring with two shows at the Paramount in Oregon, then headed to Boston and the acoustically friendly confines of its Music Hall for a four-night run. This show is from the first night and was hence the third show on the "comeback tour." The band is clearly settling back into a groove here; in particular, Jerry Garcia’s voice is as strong as it’s ever been, and the inclusion of some unusual material (like the only encore version of “Franklin’s Tower” ever performed) makes this a highly collectible show. Among the highlights are a dazzling “Crazy Fingers” from Blues for Allah (which had been released during the band’s hiatus, so new to set lists), and an exceptionally long and tight “St. Stephen” to lead off the second set. The third disc offers bonus gems, like a rare version of “Mission in the Rain,” from the last night of the run, too; excellent sound throughout, long out of print!