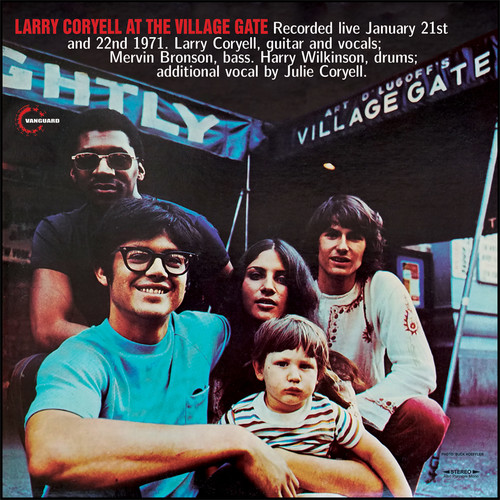 Larry Coryell unexpectedly passed away earlier this year right after our Real Gone reissue of his second solo album, Coryell, and with the renewed attention given to his monumental recorded legacy, we decided to move up our long-in-the-works domestic CD debut of his album At the Village Gate in order to expose this classic record to the largest audience possible. This is the recording where Larry really went axe-to-axe with Jimi Hendrix, who had passed away four months prior to the January 1971 gigs that formed the basis of this release; perhaps in response, Coryell formed his own power trio of his own composed of himself, drummer Harry Wilkinson, and bassist Mervin Bronson to play material that stylistically wasn't too far removed from the funk/jazz/rock of Jimi's Band of Gypsys. The result was a fan favorite that somehow has never been issued on CD in the U.S. (and came out overseas over a decade ago on a couple of lightly-distributed labels of suspect provenance). Coryell's Gibson 400 has seldom sounded as slashing as it does here, while Wilkinson's playing (aptly described as "busy" by Downbeat) is a cross between Mitch Mitchell, Tony Williams, and Buddy Miles; Bronson keeps things rooted when Coryell heads for the stratosphere. Which is often... this is maybe the most "heroic" of this underappreciated guitar hero's records. Mike Milchner's remastering captures every coruscating note, and Bill Kopp's liner notes feature an interview with drummer Wilkinson. One of the truly great jazz-rock guitarists, loud, free 'n' fiery.