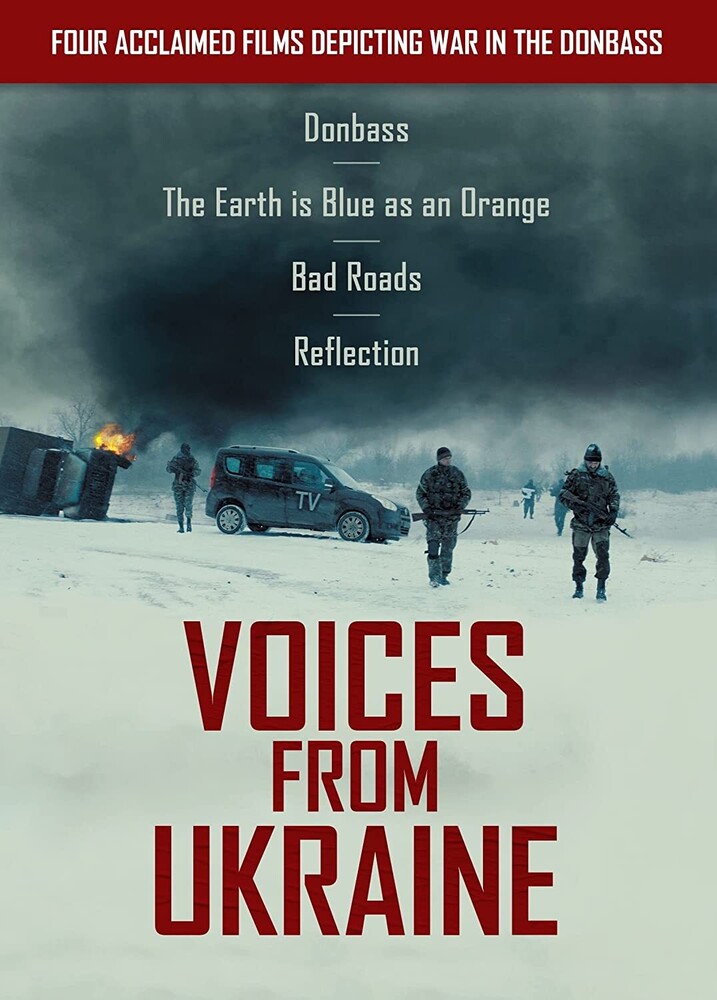 SYNOPSIS:This collection of recent, critically-acclaimed Ukrainian films depicts the experience of Ukrainians in the Donbass - the contested Eastern region occupied by Russian-backed separatist militants that served as a pretext to Russia's invasion of Ukraine in February, 2022 and the ensuing crisis.BAD ROADS (2020, directed by Natalya Vorozhbit)Four short stories are set along the treacherous roads of Donbass, Ukraine during the war. There are no safe spaces and no one can make sense of just what is going on. Even as they are trapped in the chaos, some manage to wield authority over others. With a particular sensitivity to the vulnerability of women during wartime, Vorozhbit's debut feature, Ukraine's official submission to the 2022 Academy Awards, "reflects the gloomy political reality of Ukraine and the pressure that Russia exerts on everyday life" (IndieWire).DONBASS (2018, directed by Sergei Loznitsa)In the Donbass region of Eastern Ukraine, mid-2010s: a hybrid war takes place, involving an open armed conflict alongside killings and robberies on a mass scale perpetrated by Russian-separatist gangs. In the Donbass, war is called peace, propaganda is uttered as truth, and hatred is declared to be love. Life is suffused with fear and suspicion. What is real and what is fake news? Called "a darkly satirical omnibus of scathing vignettes" by the Washington Post, DONBASS serves as a crucial interpretation of the Russo-Ukrainian war, but the film is not, ultimately, a tale of one region or one conflict. It is about a world lost in post-truth and fake identities. It is about each and every one of us. REFLECTION (2021, directed by Valentyn Vasyanovych)In 2014, Ukrainian surgeon Serhiy enlists to fight Russian military forces in the Donbass region, where he is captured by enemy soldiers. Now a prisoner of war, Serhiy is forced to witness horrifying scenes of humiliation and violence at the hands of the Russian invaders, his medical background co-opted to dispense mercy killings to the tortured. After his release, he returns to his comfortable middle-class apartment, still suffering from the trauma of his experiences. Looking inward, Serhiy tries to find a purpose in life by rebuilding his relationship with his daughter and ex-wife, learning how to be a human being again through being a father.THE EARTH IS BLUE AS AN ORANGE (2020, directed by Iryna Tsilyk)To cope with the daily trauma of living in a war-zone, Anna and her children make a film together about their life in the most surreal surroundings. Winner of the Directing Award for World Cinema Documentary at the 2020 Sundance Film Festival, THE EARTH IS AS BLUE AS AN ORANGE stands not only as a remarkable document of the Russo-Ukrainian War through the lens - literally - of this family's creative process, but as an optimistic testament to the power of art and beauty in the face of destruction.