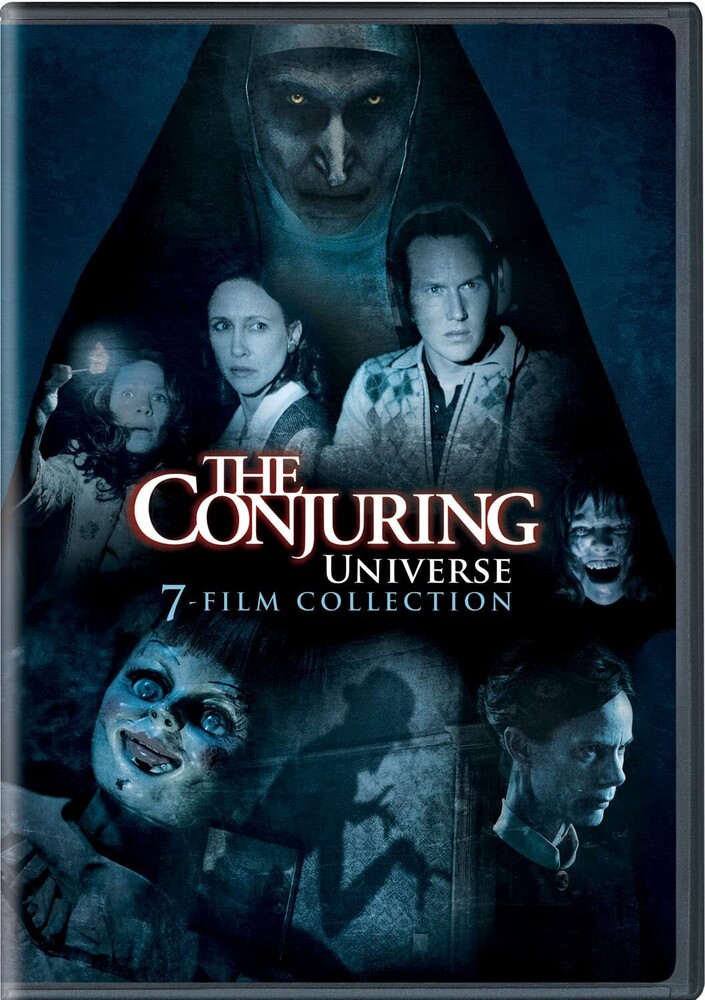 Four-disc set includes: The Conjuring (2013)Before their fame as the Amityville paranormal investigators, Ed and Lorraine Warren (Patrick Wilson, Vera Farmiga) became embroiled in the terrifying plight of Roger and Carolyn Perron (Ron Livingston, Lili Taylor)-whose newly purchased farmhouse appeared to have been haunted by vengeful spirits. To cleanse the house and protect the family, the Warrens dared to seek out the home's dark secrets. Eerie chiller from director James Wan co-stars Shanley Caswell, Hayley McFarland. 112 min. C/Rtg: R Annabelle (2014)Annabelle, the creepy doll from 2013's "The Conjuring," takes center stage in this fright-filled prequel. When John Form (Ward Horton) gives his wife Mia (Annabelle Wallis) a new doll for her collection, he has no idea the hell that's about to be unleashed. With Annabelle at the center of a series of bizarre occurrences, the Forms soon learn that the terrifying toy brings with it a demonic presence that's out to claim someone's soul. With Tony Amendola and Alfre Woodard. 98 min. C/Rtg: R The Conjuring 2 (2016)London, 1977: When the Hodgson family begins to experience a series of strange and inexplicable supernatural events surrounding young Janet (Madison Wolfe), professional paranormal experts Ed and Lorraine Warren (Patrick Wilson and Vera Farmiga) are called upon to investigate. Initially believing the girl is possessed by the spirit of a man who died in the house, the Warrens soon discover that there may be something far more evil at work. Frances O'Connor, Simon McBurney, Franka Potente also star in this spooky sequel. 134 min. C/Rtg: R Annabelle: Creation (2017)Back in the '50s, a dollmaker (Anthony LaPaglia) and his invalid wife (Miranda Otto) opened their home to a stranded nun (Stephanie Sigman) and the young girls in her charge. Unfortunately, the children came upon the disturbing doll that their host crafted in the image of the daughter he lost in a car accident... and soon afterwards, it's unholy secrets. Pulse-pounding origin prequel for the pernicious poppet of "The Conjuring" co-stars Talitha Bateman, Lulu Wilson, Philippa Coulthard. 110 min. C/Rtg: R The Nun (2018)In 1952, the quiet of a Romanian monastery was shattered by the suicide of a nun... and the Vatican put the investigation in the hands of exorcist Father Burke (Demián Bichir) and novitiate Sister Irene (Taissa Farmiga). They learn to their horror that a demonic entity stalks the abbey... and that their own lives and souls may soon be forfeit. Origin story/spin-off for the sinister soror of "The Conjuring 2" co-stars Jonas Bloquet, Ingrid Bisu, Charlotte Hope, and Bonnie Aarons as the Nun. 96 min. C/Rtg: R Annabelle Comes Home (2019)Set after the opening scenes of "The Conjuring," this chilling series installment finds demonologists Ed (Patrick Wilson) and Lorraine Warren (Vera Farmiga) locking deadly doll Annabelle up in their house for safe keeping in the early 1970s. But when Annabelle's case is opened, she unleashes a host of evil spirits, forcing the Warrens' young daughter Judy, (McKenna Grace), her babysitter Mary Ellen (Madison Iseman), and Mary Ellen's friend Daniela (Katie Sarife) to fight for their very survival. 106 min. C/Rtg: R The Conjuring: The Devil Made Me Do It (2021)Connecticut, 1981: Occult investigators Ed and Lorraine Warren (Patrick Wilson, Vera Farmiga) were on hand to document the exorcism of 8-year-old David Glatzel (Julian Hilliard). Ed, however, was certain that the demon fled into the body of David's sister's boyfriend, Arne Johnson (Ruairi O'Connor)-and after Johnson murdered his landlord, they'd face a perilous path in aiding his defense. Third franchise thriller also stars Sarah Catherine Hook, Ronnie Gene Blevins, John Noble. 112 min. C/Rtg: R