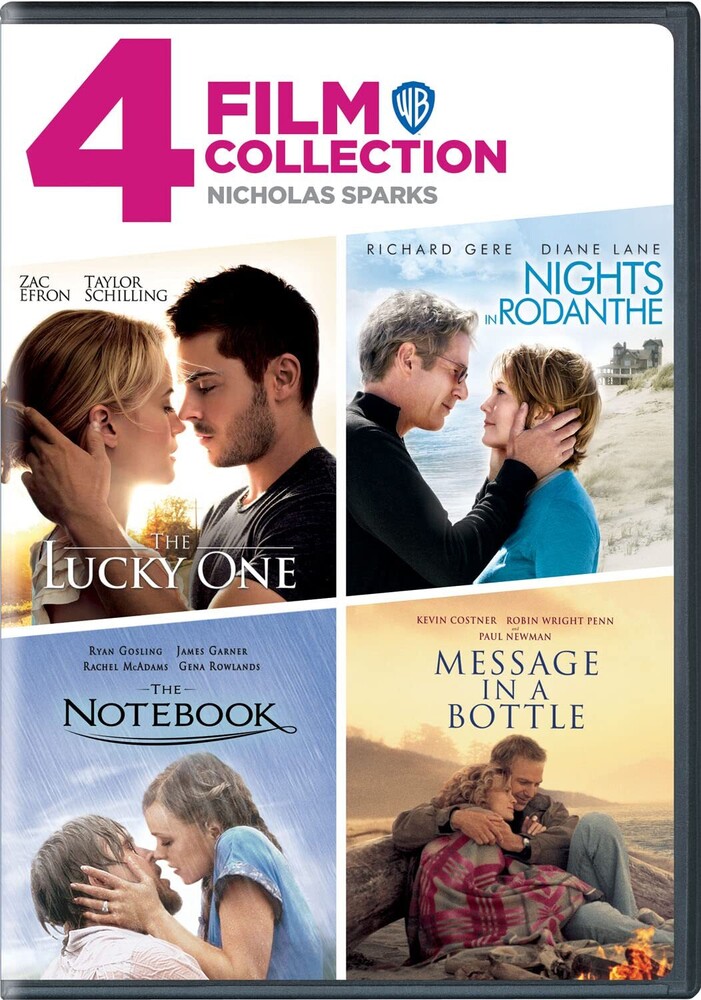 Four-disc set includes: Message In A Bottle (1999)Sensitive romantic story adapted from Nicholas Sparks' popular novel stars Robin Wright Penn as divorced Chicago newspaper researcher Theresa Osborne, who finds a bottle containing a moving love letter on a Cape Cod beach. She tracks it to Garret Blake (Kevin Costner), a lonely North Carolina boat mender and widower, and the two eventually begin a tentative relationship. Paul Newman co-stars as Blake's cantankerous father. With John Savage, Illeana Douglas. 131 min. C/Rtg: PG-13 The Notebook (2004)A man reads to a nursing home patient from a faded notebook, sharing with her the story of star-crossed lovers Allie (Rachel McAdams) and Noah (Ryan Gosling) in 1940s North Carolina. Reunited seven years after a summer romance, the now-engaged Allie is forced to choose between her fiancé and the love she feels for Noah. Powerful romantic drama, based on the Nicholas Sparks novel, co-stars James Marsden, Gena Rowlands, and James Garner. 124 min. C/Rtg: PG-13 Nights In Rodanthe (2008)As a hurricane bears down on an inn on the Outer Banks of North Carolina, two strangers-a surgeon (Richard Gere) in search of redemption and the inn's caretaker (Diane Lane), a woman seeking respite from her troubled marriage-are thrown together by chance and drawn into a life-altering relationship. Moving romantic drama, based on the novel by Nicholas Sparks ("The Notebook"), also stars Scott Glenn, Christopher Meloni, Mae Whitman, and an uncredited James Franco. 97 min. C/Rtg: PG-13 The Lucky One (2012)On the field of combat, a young Marine (Zac Efron) finds a photo of a young woman (Taylor Schilling)... and believes it to have been his good luck charm through three tours in Iraq. Once back in the States, fate brings him to her doorstep... and as far as she knows, he's just answering a job ad for her family business. Can he build trust-and perhaps more-in spite of a resentful ex (Jay R. Ferguson), and the truth about her picture? Adaptation of the Nicholas Sparks romance also stars Blythe Danner. 101 min. C/Rtg: PG-13 Widescreen; Soundtrack: English Dolby Digital 5.1; Subtitles: English (SDH).