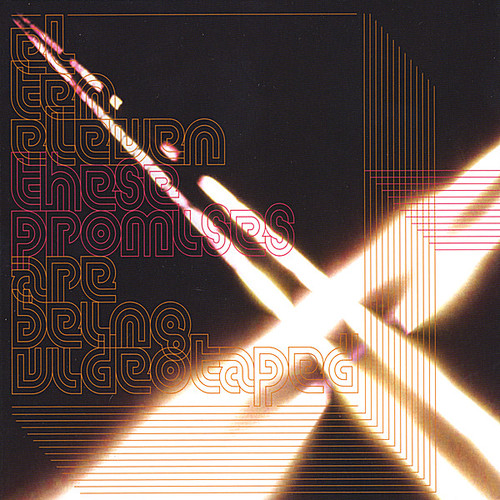 "Their third record, These Promises Are Being Videotaped, is packed full of danceable melodies that put Ratatat to shame." Spin.com "The double-neck guitar is the ultimate signifier of musical masturbation and phallocentric crotch rocking. That is, unless you're El Ten Eleven, the post-rock duo from Los Angeles, who lay down simple rhythms, then wield the finished product as mechanized dance jams." Flaunt "Once the record stops, you want more, and more, and more." Filter "DFA 1979 and Ratatat are obvious antecedents, but these guys place a great emphasis on layering and manipulating loops on top of a consistently bodyrocking beat." RCRDLBL.com "Kraftwerk in the Sky." The Onion 'Audience members (like myself) stare in amazement at the fury of Kristian's fingers and feet... it makes the Polyphonic Spree seem like member-hoarding pussies.' LA Alternative Press "Your album hasn't left my CD player since last month." Spiritualized "Although El Ten Eleven haven't yet garnered the mainstream praise they deserve, their sophisticated sound earned them a prominent spot on the Helvetica (2007) soundtrack - and scores of new fans in the process." Flavorpill "Winning the prize for the most technically impressive band I've seen this year was L.A.'s El Ten Eleven. Dunn was often playing guitar and bass simultaneously on his double-necked guitar while his foot moved in a blur across effects and looping pedals. The coordination and precision was breathtaking without straying into gimmickry." DenverPost.com "Is as thoughtful as it is unconstrained as it is satisfyingly accessible." Rochester City Paper 'As anyone who's ever seen the Soft Lightes can attest, Kristian and Tim are ridiculously good. El Ten Eleven's songs are all lifts and falls, transitioning easily from mellow indie sounds to full-on bounce-worthy rock and back again all within the span of four minutes.' OC Weekly "Constructed extraordinary tunnels of sound using various effects pedals and sampled loops that they create on the fly. Just think Explosions in the Sky - but with a pulse." Seattle Times "Kristian finds some absolutely sick dance riffs on this one -- parts that would normally go to a synth and sound flat or tired sound explosive when played on live bass here. These dudes just keep getting better and better." Music For Robots 'West coast duo El Ten Eleven make instrumental rock that's not boring. I swear. On the moody, dexterous 'Lorge,' the combo fluctuates between dreary and driving with ease.' Entertainment Weekly 'El Ten Eleven's dense, textured instrumentals recall post-rock standard-bearers like Tortoise or the Mercury Program, except theirs are created by only two musicians - and a whole lot of effects pedals.' LA Times 'The only way I can describe [Jumping Frenchmen Of Maine] is that it takes Soulwax's chin-swinging 'E Talking' onto the dance floor, matches it move for move and eventually leaves it in a foaming dehydrated mess collapsed in the corner.' Circle Magazine UK "It might sound delusional to say the dude in El Ten Eleven is playing bass in a way that's never been done before, but if you've seen these guys live, you know it's not out of the question." Arizona Daily Star.