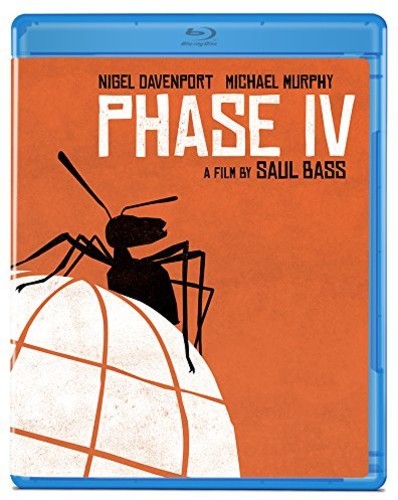 Blu-ray. This gripping film, part science fiction, part philosophical musing on man's place in the universe, has gained cult status. Michael Murphy (Manhattan) stars as James Lesko with Nigel Davenport (A Man For All Seasons) as Dr. Ernest Hubbs, scientists in search of answers to an evolutionary shift in the ant population that's adopted a hive mentality allowing the ants to team with others of their species to create a super colony. In an effort to better understand the intelligent and powerful new life form, Lesko and Hubbs are faced with the choice of either communicating with, or eradicating their antagonists. Lynne Frederick is cast as Kendra, an ant attack survivor who'll play a pivotal role in deciphering the ants' mysterious existence. Phase IV is written for the screen by Mayo Simon (Futureworld), photographed by Dick Bush (Ken Russell's Tommy and Mahler) and scored by Brian Gascoigne (The Emerald Forest) with contributions by Stomu Yamashta, David Vorhaus and Desmond Briscoe.