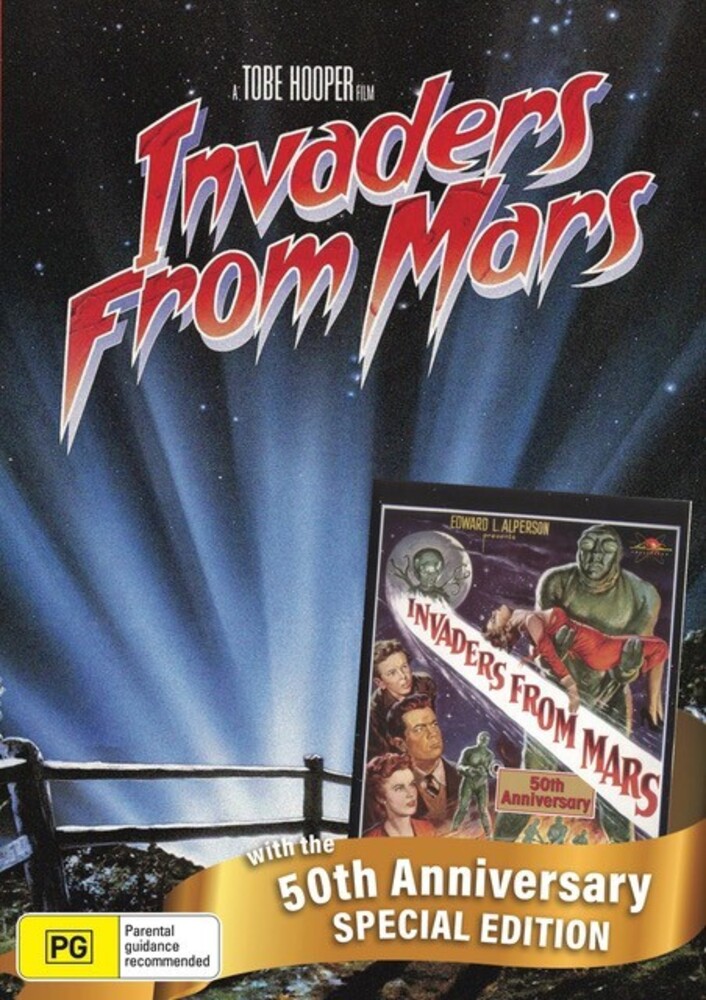 Special 2 DVD Set of the 1953 cult classic coupled with the 1986 remake from Director Tobe Hooper. Invaders From Mars (1953): In classic, retro sci-fi style, Invaders From Mars is considered by many to be the definitive cold war sci-fi paranoia parable. Liberally laced with paranoia of that era, it is not only an exceptional film, but a reflection of the sentiment of the 50s as well. During a thunderstorm, young David McLean happens to see a flying saucer land in a nearby field. No one believes his wild and frantic tale since the alien invaders have buried themselves and their ship underground. But when the towns inhabitants begin acting unusually, David realises it's time to take action before everyone succumbs to the invaders from Mars. Invaders From Mars (1986): Cult horror legend Tobe Hooper (The Texas Chainsaw Massacre, Poltergeist) tips his hat to the crazed invasion films of the 1950s, spinning a creepy tale of small town paranoia in a science-fiction blast from the past. Young David Gardner's fantastical dreams turn inside out and upside down when invaders from the red planet land in his backyard and unleash their wrath on an unsuspecting world. As the aliens take over the malleable minds of his parents, school teachers and friends alike, David becomes paralyzed with fear and threat of the unknown. With the aid of the school nurse (Karen Black) and the U.S. Marines, David must gather up the courage and ingenuity to stop them before they transform the entire human race into a mass of empty-headed zombies! Also starring Timothy Bottoms, Louise Fletcher, Bud Cort and featuring eye-popping effects from the Oscar winning specialists behind Star Wars, Aliens and Jurassic Park, Invaders From Mars amps up the eerie atmosphere and digs deep into the mind to not only capture your attention, but control it for ever!