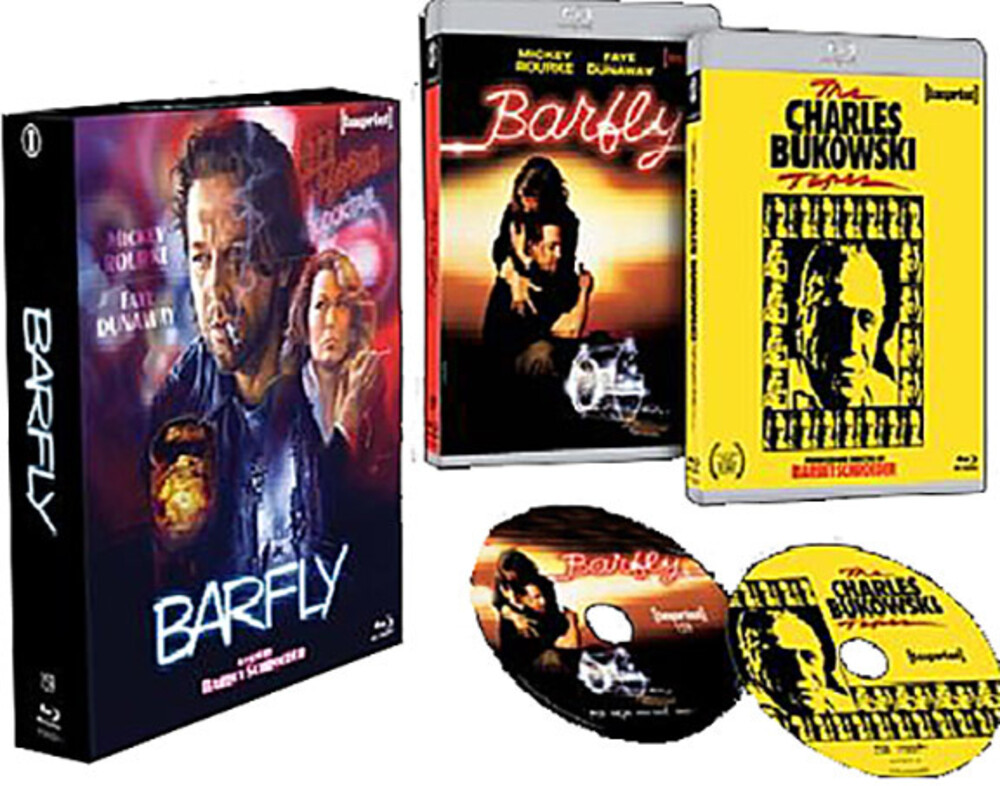 Henry Chinaski (Mickey Rourke) is a talented writer of prolific prose; unfortunately, he's also a skid-row alcoholic with a violent temper. He picks fights nightly with Eddie (Frank Stallone), the bartender at the local watering hole, the Golden Horn, and lives in a seedy tenement, stealing food and trying to scrape together enough money for booze. Fellow alcoholic Willa Wilcox (Faye Dunaway) catches Henrys eye at the bar one afternoon and although she has a reputation for being unstable, the two embark on a relationship with each other and the bottle. Based on a semiautobiographical short story by poet and screenwriter Charles Bukowski and directed by Barbet Schroeder, Barfly offers insight into the world of the alcoholic, where all that matters is the next drink. Starring Mickey Rourke, Faye Dunaway, Alice Krige & Frank Stallone. Limited 2 Disc Hard box edition with unique artwork on the first 1500 copies. Special Features and Technical Specs: Disc One: Barfly 1080p High-definition presentation on Blu-ray Audio commentary with director Barbet Schroeder NEW Kim Cooper and Richard Schave of Esoteric Tours, Los Angeles historians and preservationists. NEW Interview with editor Eva Gardos NEW Interview with actress Alice Krige NEW Interview with actor Frank Stallone NEW Interview with production designer Bob Ziembicki Theatrical Trailer Aspect Ratio 1.85:1 Audio English LPCM 2.0 Optional English HOH subtitles Disc Two: The Bukowski Tapes When Barbet Schroeder (More, General Idi Amin Dada, Single White Female) began work on the movie Barfly, he had no idea that it would be such a struggle. During the seven years it took him to complete the film, he turned his cameras on it's screenwriter, poet and novelist Charles Bukowski Bukowski, legendary for his drunken excess and frank observations on life, love, and survival, took no exception with Schroeder. Schroeder eventually completed The Charles Bukowski Tapes, a four-hour long study of the man and the music of his words. Original Aspect Ratio 1.33:1 Audio English LPCM 2.0 Mono