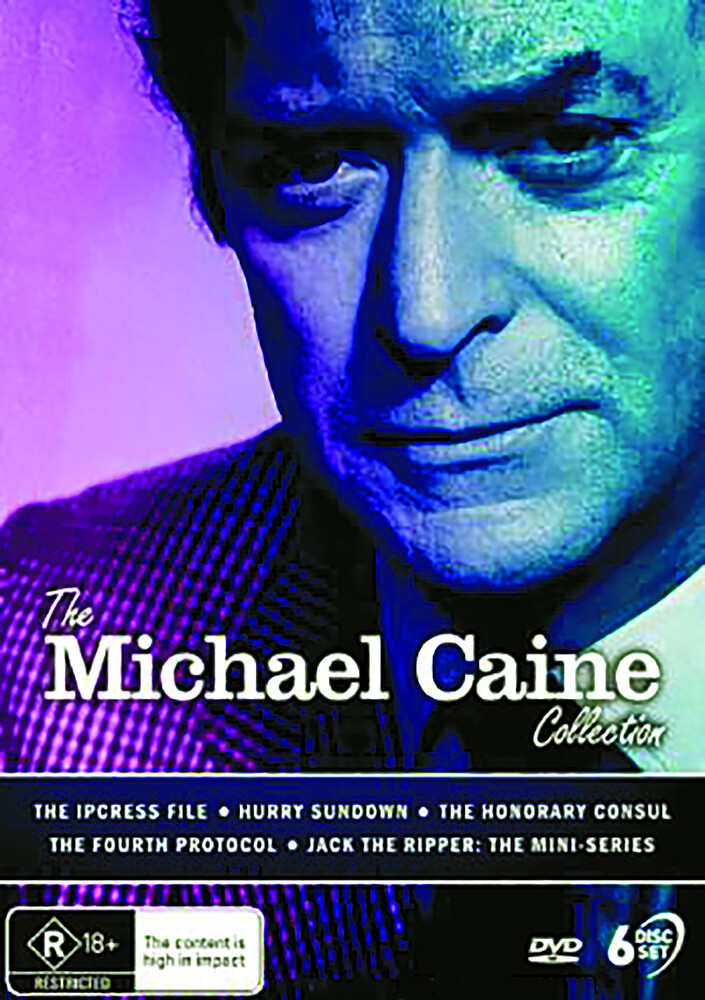 Contains:- THE IPCRESS FILE- HURRY SUNDOW- THE HONORARY CONSUL- THE FOURTH PROTOCOL- JACK THE RIPPERTHE IPCRESS FILE: Tasked with investigating the kidnappings and brainwashed reappearances of top scientists, including Dr Radcliffe (Aubrey Richards), the insubordinate British spy Harry Palmer (Michael Caine) navigates his way through criminals, secret agents and his superiors (Nigel Green, Guy Doleman). While attempting to bring in the suspect Bluejay (Frank Gatliff), Palmer discovers a mysterious audiotape labelled "IPCRESS", an inconspicuous, but ominous, piece of evidence.HURRY SUNDOWN: Urban industrialisation is growing in Georgia after World War II. Riverside a modern farm and canning plant, is incomplete because promoter Henry Warren (Michael Caine) needs two small privately-owned farms. One belongs to a white family, Rad McDowell (John Phillip Law) and his wife, Lou (Faye Dunaway); the other to a black family, Rose Scott (Beah Richards) and her son, Reeve (Robert Hooks). The option on the land owned by Julie Ann Warren (Jane Fonda) will expire unless Henry can get title. When Julie Ann appeals to her childhood Mammy Rose, Reeve gives the original deed to Professor Thurlow (Rex Ingram) whose schoolteacher-granddaughter, goes to court and is a farce as conducted by Judge Purcell (Burgess Meredith), until Julie Ann withdraws her claim.THE HONORARY CONSUL: As a boy, Eduardo Plarr (Richard Gere) and his mother fled Paraguay after his father was captured and held as a political prisoner. Now a practicing doctor in a small Argentinian city, Plarr is approached by an old friend who tells him he's working with the Paraguayan underground and a disgraced British counsel (Michael Caine) on a plan to kidnap an ambassador and hold him for ransom in exchange for the release of Parr's father and several other prisoners. Now they just need Plarr's help.THE FOURTH PROTOCOL: British spy John Preston (Michael Caine), recently demoted by his boss for a well-intentioned but unsanctioned mission, stumbles onto a covert plot by KGB agent Valeri Petrofsky (Pierce Brosnan), who is attempting to build and detonate a nuclear bomb on British soil and blame it on the Americans. With the support of the ailing MI5 director, Preston, who is still at odds with several of his superiors, attempts to uncover and thwart the plot before it's too late.JACK THE RIPPER: In the autumn of 1888, Chief Inspector Abberline is sent to investigate the murder and mutilation of a prostitute. Others soon meet the same fate, and a press frenzy ensues. With Jack the Ripper terrorising London and both police and outraged public clamouring for a swift conclusion, Abberline and his partner, Godley, work doggedly through their list of suspects more than one of whom has royal connections.