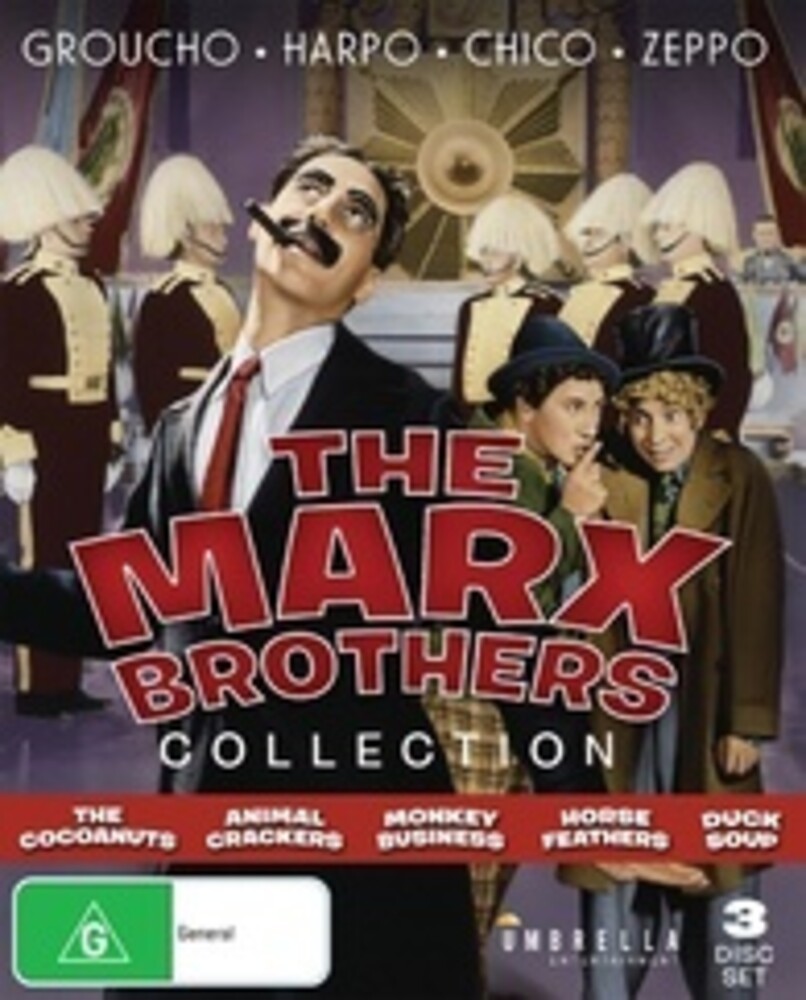 Three-disc set includes: The Cocoanuts (1929)The feature film debut of the Four Marx Brothers, taken from their hit Broadway comedy, finds the quartet in a run-down Florida hotel, where owner Groucho insults guests, woos Margaret Dumont, and vainly tries to auction off "choice" resort property. Features Groucho and Chico's "Why a duck?" routine. With Kay Francis, Mary Eaton. 94 min. BW/Rtg: NR Animal Crackers (1930)The Marx Brothers turn a high society soiree upside down as only they can in this hilarious romp. When a valuable painting goes missing at a party held in honor of famed African explorer Captain Jeffrey Spaulding (Groucho), he, his faithful secretary (Zeppo), a musician (Chico), and a professor (Harpo) may be the only ones who can track it down. What could go wrong? With Margaret Dumont, Lillian Roth. Features the song "Hooray for Captain Spaulding." 97 min. BW/Rtg: G Monkey Business (1931)It's anything but smooth sailing for Groucho, Chico, Harpo, and Zeppo when they stow away on an ocean liner in this, their first comedy written expressly for the screen. After causing much mayhem for the ship's passengers and crew, the boys arrive in New York City, where they wind up trying to rescue a gangster's daughter who's been kidnapped by a rival. This gem of Marxist mania also stars Thelma Todd, Harry Woods. 78 min. BW/Rtg: NR Horse Feathers (1932)The new Huxley College president (Groucho) is encouraged by his son (Zeppo) to build a winning football team by signing some talented players in time for the big game. But that plan goes quickly awry when the "stars" he hires turn out to be a pair of misfits (Chico and Harpo). Marx Brothers classic stars Thelma Todd as a "college widow" who woos all four guys. And remember, the password is "swordfish." 67 min. BW/Rtg: NR Duck Soup (1933)The pinnacle of Marxian madness finds Groucho as Rufus T. Firefly, president of Freedonia; Chico as his trusted aide and a spy; Harpo as Groucho's chauffeur; and secretary Zeppo nodding his head. This wild satire, with political humor decades ahead of it's time, co-stars Margaret Dumont, Louis Calhern, Edgar Kennedy. 69 min. BW/Rtg: NR Standard; Soundtrack: English. Region Free